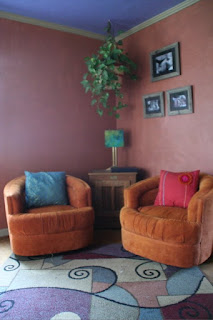 We took our house off the market right before Magnolia was born. Let's face it people! The economy SUCKS SUCKS SUCKS! *breathe* So, I'm trying to maximize the space in our itty bitty house. With 2 kiddos, a St. Bernard that shakes slobber all over the walls, a German Shepherd that's molting, 2 cats that miraculously appear underfoot as I descend the perilously steep stairs, and a husband that sheds his clothing as he walks from room to room, making the house seem larger than it is is no easy task. One of the major problem areas is our living room. If you have more than 2 people in it at one time claustrophobia kicks in. I sold the loveseat. The thing was like a third hairy dog anyway. The plan was to buy a couple of swanky chairs to replace it, thus opening up the room a bit. In the meantime I'd just bring down the pair of $40 orange chairs we bought off of Craigslist (bless it). I love it! I may not buy new chairs after all. Sure, they're ugly and if you pick one up from the bottom you'll get a staple in your hand. But they swivel! And they're orange! And River loves to jump from one chair to the next, which is practically exercise, right?
Email Post
Labels: chairs craigslist dogs kids