Yum and fun in the Beaverton sun 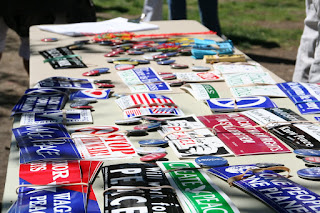 One of the best things about our neighborhood is the Beaverton Farmer's Market. It kicks off Mother's Day weekend and then takes us through summer and beyond fall with its cinnamon glazed almonds, kettle corn, real corn, sheep's milk cheese, massive morning glories, the world's longest sausage vendor line (ahem, the line is long, not the, um, sausage vendor), balloon swords, lefty bumper stickers and music. The music isn't always great, but when it is, dang if I don't bust out the white girl dance. 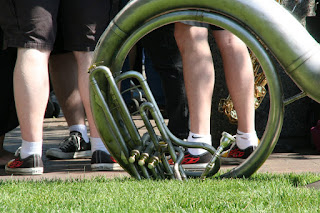 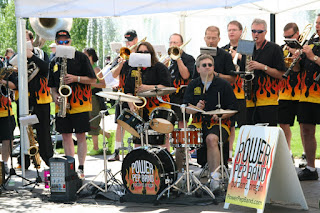 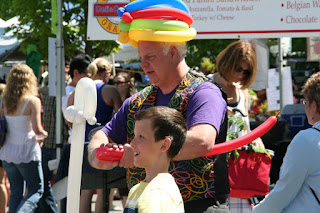 We're just a 10 minute walk away, but Magnolia's been chompin at the bit to break in her new bike helmet. So we saddled up the bike trailer, buckled the kids and prayed that Maggie wouldn't freak out. Less than a block into the ride and we look back to see if she's crying her eyes out or yanking her helmet off. Instead she's looking out the plastic window, her sippy cup tipped back, casual and, maybe, bored. She loved it.

The kids, ours and the Gustafson's, hit the fountains like two peas to a pair of nostrils. Once Maggie realized that the great towers shooting up from the ground were her favorite of all elements she simply couldn't be dragged away. 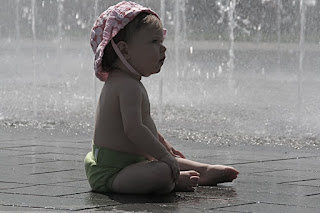 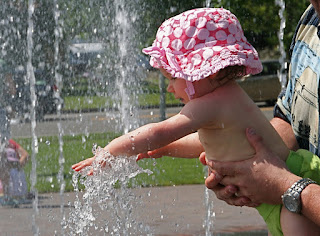 Every time a boy wiped out as he ran through and around the slick concrete I braced myself to say "Well, that's it. Pack it in. Time to go." and then the boy would show me what's what, bounce back up, and run another 10 paces before wiping out again. 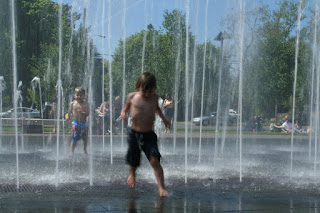 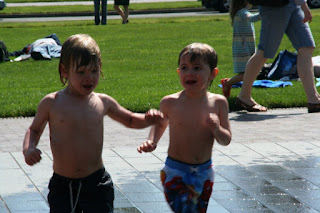 Kristen and I decided to shop around for something to cook that night. We strolled, babes on hips, through the familiar stalls. 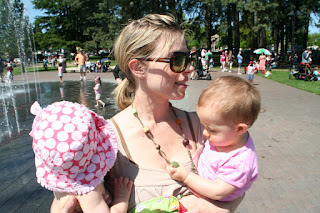 We never found the oysters but decided on a flatiron steak from Lonely Lanes Farm in Mt. Angel, a bunch of beautifully thin and green asparagus, and a spreadable sheep's milk herb cheese. Our dinner miiiiiight have been slightly more satisfying had we raised the beef ourselves, grown and rubber-banded the asparagus, and milked the fleece right off the sheep, but I don't know, it was pretty awesome. River didn't even say his arm hurt because I made him eat asparagus! Must be something in that Oregon soil. 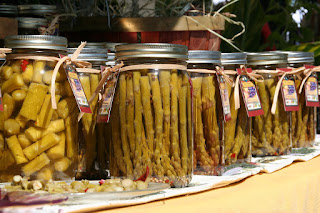 So remind me, when I start complaining about how there are so few restaurants with good patios in Beaverton, or how I hate Highway 217 and new wireless stores, that I have this: an incredible community, farm-fresh food, amazing friends, and the world's longest sausage vendor (line) all within a stone's throw of my home. And at some point I'll bet John rides his bike home with another kitten. 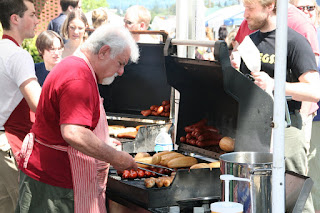 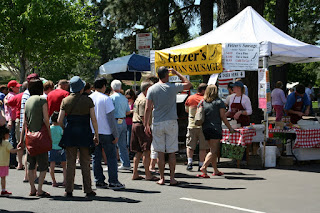