the lorax didn't do enough. 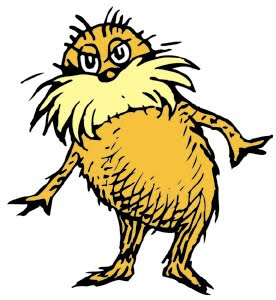 I had intended to blog about the brilliance of Christmas PR from way back in the 4th century AD. In fact, I may still, so hold that thought...

I was chatting on facebook with a friend last night and the subject of Dr. Seuss came up (as it is prone to in prolonged conversation, right?). "Who's your favorite Dr. Seuss character?" We both quickly said The Lorax. (And then I added Mrs. McCave, you know, the mom who named all her children Dave. It's just comforting to know that others crave simplicity amidst the chaos. I'd even go so far as to just refer to those around me as an eye blink. If I blink your way, you know I'm talking to you. That's your new name.)

So, The Lorax. Remember him? "I am the lorax I speak for the trees...." and it occurred to me, really? You speak for them? But what do you DO for them? The Lorax finger wagged The Onceler, reprimanding him for making his pointless (but ever-so-useful) Thneeds. He cautioned him. He illustrated the err of his ways by gesturing to the Brown Bar-ba-loots who's tummies were groggy, and to the Humming-Fish who's water had gone foggy, and to the Swomee-Swans who's sky had gone smoggy -- all as a result of the chop chop chopping of the Truffula Trees. But The Lorax was little, and his words fell on deaf ears. And The Onceler kept chopping, he had nothing to fear. You know how it goes. The last Truffula Tree came down. The Onceler's business shut down. And The Lorax lifted his tush and flew right out of town.

Because he didn't DO anything.

The Onceler is awful. He's greedy. He's bad. But his face is hidden, so it's hard to get mad. But I can see the face of The Lorax. And I hear him well enough. If words are all he has to give, then he may as well be stuffed. A soft little Wilford Brimley selling oatmeal and insurance, for the greater good.

What could he have done? I'd like to see a new version of The Lorax. And it would go something like this (the abbreviated version):

There once was a forest, lovely and free,
filled with the softly tufted Truffula Trees.
And a smelly nasty dude wanted them all chopped down,
to make silly little doodads that were landfill-bound.

And the animals, the animals! that lived in the wood
they just wanted to live, and so they thought that they should.
But as the Truffula Trees began to thin
so did the waistlines of the animals therein.

Until The Lorax appeared with his might and his swagger
and he threw around threats and eyebrow raises like daggers!
The smelly nasty dude just shrugged, "Your talk is a waste.
I have garbage to make! Quick quick without haste!"

So The Lorax he rounded his posse from that mighty great wood.
He gathered them all among the trees that still stood.
He declared "We are bigger and stronger than he!
And if words will not stop him, well, then let it be WE!"

The We were the animals, the who's and the breezes
that blew through and flew through the Truffula Treeses.
They wrapped their arms tight 'round the trunks and the branches
and harvested seeds (just in case, were their chances).

The We put up barriers so no shoppers could shop them,
and it all seemed to work! The We COULD stop them.
The villain collapsed on his factory floor
"I give up! I simply can't take any more!
You did it. You want this bad, I can tell."
Then he left, already scheming about what next he could sell.

Jaimey said…
I love the Lorax.