So here we go again with another timed 8 minute writing assignment. This one was a simple phrase: camping food. Aaaaaaand go.

His pork adobo would find itself eaten out of the dirt when it slipped off the tip of a plastic fork. It was too good to donate to the dust. The tomatillos would relinquish their paper skins to his thick fingers, practically undressing themselves so that they could be prepared into a succulent salsa verde. The bamboo skewers would dance in their afternoon soak, as they readied themselves to be laid out over the flames that evening, when the water would be licked from their splinters. Oscar prepped, cooked, grilled and served with the passion of an artist, the devotion of an alpine monk, and the humor of your very best friend.

It didn’t matter that he wasn’t floating in the lake, or that the batteries in the radio had died hours ago and he was left to listen to the sounds of golf balls being driven off the point to the opposite shore. Oscar just hummed and moved in graceful precision while the bandana did its very best to keep the sweat from rolling from the tip of his nose to the roasted chilies below. Not that it would have mattered. 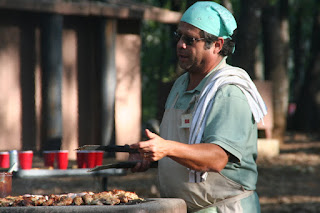