As with all good rat-inspired pastries, this one started with the dream of finally eating a banana royale, a tasty confection from the good folks at  Madrona Hill Cafe. Tim had wanted one a few weeks ago, had had it made for him (which took a good 15 minutes at the hands of the chick with the cool taped-together glasses), took it to-go, and then was blushedly reminded by moi that we had decided we weren't eating sweets for the month, and well, um, is nutella considered a "sweet"? Frown. Shrug. Meh. Totally up to you. I won't judge. And Tim, with his sweet-tooth hardened against a wall of pure will, did NOT unwrap that banana royale, that tasty (so we've heard) breakfast delight filled with goopy nutella, fresh sliced banana and bacon. Baaaaaaaacon. I've seen such strong, thick will only once before. And it nearly fell a nation.

So today, Tim awoke with a sparkle in his eye and a shimmer of bacon grease on his horizon. He would have that banana royale. And let the crispy bacon tips linger in his goatee for only a moment before he lapped them up, and then he'd lick his fingers of every last crumb. Game. On. Banana. Royale.

We parted ways. I wished him well. High fived his stomach knowing the major award that was awaiting it down N. Greeley Ave.

Then I got this text.


Tim:
Couldn't do it. Got a scone because the display is normally cleaned out and I can get a royale anytime.
It continues to be all elusive.

Tim:
Whatevs. I enjoy a good pastry cat and mouse

Tim:
That wouldn't be too hard. We could get a piece of wood and cut a little arch hole in it and have the mouse head poking out.
Also. I love us. (for the sake of mildly narcissistic sincerity, I couldn't delete this)

me:
I'm going to do it. I think pizza dough mice.

And this is where the story continues, from pastry, to text, to allowing rats in my kitchen.

I made pizza dough. Ta da! My favorite recipe. 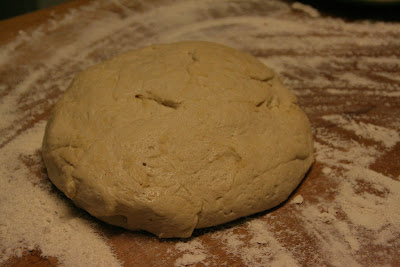 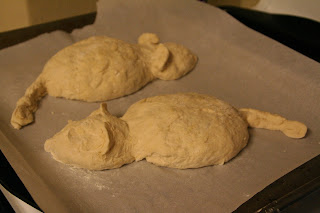 I was nervous that little tiny mice wouldn't survive being baked. So, I divided the dough into two. The dough was still a tad sticky. Too much flour and I wouldn't have been able to shape it. And even then, this was the best I could do. Pizza dough was not meant to be vermin.

I added a bit of olive oil, sea salt, rosemary and shredded mozzarella. Cause though rats may have brought plague upon plague to the sorrow of human history, dammit, they still deserve a savory death. The change begins with me. 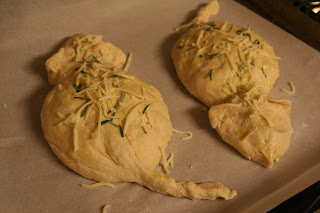 And then I baked them. On a parchment lined sheet at 425 for about 15 minutes.