So this is how today happened. I woke up at about 9am. But I didn't get out of bed til around 10ish (wink). Or maybe 11. Crap if I know. It was deliciously late. And I awoke after having a night filled with broken apart adventures which would of course include me being MCA incarnate, though at a glorious peak of 26 years old, and walking on a rapidly altering planet with my father, who was of course a 6 year old black child, well-dressed in his Sunday best, and we discussed how we would overcome this massive geographic shift as the grass slopes turned abruptly upward and devolved into a great and frothy sea filled with prehistoric underwater rattlesnakes. Fun? Totally. But also a relief to wake up from.

Then we stood on the back porch for a few, kicking the deflated pink soccer ball across the lawn for Dexter. And when it bounced flatly into the jungle-y, possibly rhubarb-y corner, we'd lose him for a second as he waded through the grasses. And he'd bring it back, drop it at our feet, then scoot back just far enough so that you knew he was ready for you to kick it again, but not far away to avoid getting kicked in the face. So you'd fake a right kick and go left when he was suckered into it. Sometimes maybe taking just a nick to his chin. Cause he'd come back from being suckered awwwwfully quick.

We headed off to Fuel up. We sat for a couple of hours in the sunny cafe, writing our blog posts that we both should have written the night before. But didn't. Cause we were waxing philosophical and stroking our chin hairs and nodding "hmm, you might have a point there chap, please, do tell mohhhre," with a long drawn out ohhhhhr and wide-eyed intrigue.

The soundtrack to our bloggathon coffee date was Abba. Like, the whole catalog. It's longer than history should have permitted. Blissfully, the Swedes finally wrapped it up, with a disco flourish and a playful finger snap and heel kick. And the baristas, likely gearing up to head home to their urban farm with chickens and goats and recycled tire raised beds strung up high with sweet peas and kale, switched the music to an upbeat, whimsical, and untalented pile of cat vomit. <-- lucky baristas. thems the life.

We decided to go to another coffee shop. "Should we bike there?" I asked.

So we headed to Tim's place to pick up his bike. I chilled out for a few in his shaggy gray carpet, a little bit of child's pose, which is absolutely always a blissful pose to chill out in. He did a bit of research online. His brother's moving out here in just a few short weeks and it's simply not very likely that two dudes would happily cohabitate in an apartment the size of my bathtub. Hence. Craigslist. Househunting. Finding a listing that allows "1-2 pets as long as they're harmless". Which is good. Cause those exist. And TJ has one. And its name is Magic. Which bodes well for the cat and I getting along.

Got back to my place, list in hand of rentals to stalk. Slid our monster laptops inside Tim's backpack, he skillfully bungee'd them to the rack on his bike. I changed my pants, cause, here's a thing. If you leave chapstick in a warm car and then forcefully pull off the cap before it's had a chance to cool off and re-set itself, it will splatter, violently, across your lap and hands.


*break* I think it's pretty great that twice this week I've been able to use a word that has an apostrophe 'd that wasn't a standard contraction like I'd.

On our bikes! Onward! Toward! Zig zagging we went through the streets of North Portland. We tracked down option #1. Paused on the sidewalk just in front, admired the windows hung as a decorative windbreak in the carport, questioned the decision to plant bamboo just outside the front window, and thought about how nice the bike ride would be between our houses. We couldn't go inside. We were simply on a creeper mission. Onward! Toward! We rode on toward N. Terry St, meandering past Kynton Park, where I will certainly be bringing the kidlets this summer to splash in the water feature and hurt themselves on the playground (looking at you here, Maggie).

Next house was a cute one on a corner. A little terrier or chihuahua thing was yapping in a window. No biggie. What's he gonna do? Tell on us? Little rat. 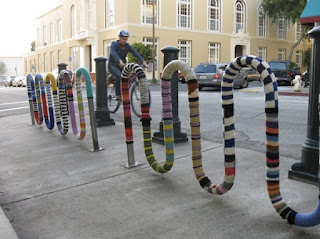 Onward! We headed to the brief but adorable in a "might be really adorable some day but still working on it" kinda way downtown strip of the Kenton District. Tim leaned his bike up against a yarn-bombed bike rack. i tucked mine into the side of a tree. We wove a power cord through the slightly ajar floor to ceiling front windows of Posies Cafe. I secured us a seat at a bench and table outside while Tim went in and secured us an almond croissant, lemon coconut cupcake and two large coffees. It took some creative positioning, but we finally figured out how to eat the croissant so that the powdered sugar wouldn't blow directly onto Tim's keyboard and sensor. We fed birds the crumbs. I fell into an inexplicable stint of melancholy. Maybe it was because the weekend was wrapping up, though really, there were still hours and hours left to play. Or maybe it was a bunch of little things, all deciding to dig a bit of their nails into my brain at the same moment. It happens. Using more emotion than what you're typically comfortable with is sometimes a good thing. Adds a new spice to a stew that you've grown too accustomed, and maybe bored, with.

And then off we were again! One more stop, closer to St. John's. Let's go creep the crap outta this place. The weather was simply lovely. Enough breeze to keep my No Enemy sweatshirt around my waist and to not make me question wearing a skirt and flip flops for a longish bike ride. And enough sun to make the decision to stay in the city instead of exploring on a mountain hike today a really really good one.

We creeped the last house. Then headed back to my place. Toward! home.

Up the driveway we rolled, sliding right into the garage at Fraggle Rock. We kicked the ball a bit more for Dexter. We stared at the grass. It was frightful. You know, the kind of grass you either get murdered in or carve out a cornfield baseball diamond in. But with dog poop.

There are two push mowers in my garage. Not the plug it in or gas it up kind, but the use your shoulders and sweat a bit kind. I hauled out the first and blazed the trail through the murderous grass. Tim shoved on behind me, cleaning up with the other wickawickawicka mower (that's totally what they sound like. wickawickawicka, except when they're stuck on a twig, then they just sound like swearing).  Partially through  the lawn project I watched as Tim laid down the handle of his mower, strode across the lawn, and met face to face with Penny, my neighbor, a super nice retired lady that sometimes has a bit much to drink and yells out loudly memories of her dad. Or calls raspily to her dachshunds. Katie and Jelly. I made that up. I don't remember their names. But they poop really big for such small animals. Anyway, Penny was reaching over the top of the fence to hand Tim a couple fistfuls of freshly picked peas. My heart did all kinds of funny things in this moment. I loved that we were tandem pushmowering, racing each other in laps around the yard. I loved that my dog was licking a moth to death in the middle of it all. I loved that Tim and Penny shook hands over the fence in introduction, and that she gave us peas that we later ate with dinner. I loved then that Dexter continued to roll in the spot where he licked a moth to death, even though it made me dry heave. And I loved that we took a break and watched as thousands of flittering birds made their course from one tree in my neighbor's yard, to the towering cherry tree in mine, and then began making the migration to the other tall tree just on the other side of the yard. Onward! flit flit. Toward! flit flit. The sun was beginning to set just beyond the northern limbs of the cherry tree. Their chirps were charming. We sipped our Stellas. We held hands. We thought about how we live in the most beautiful place on earth.

Then we went inside. Tim cracked one of his homebrews and he poured us each a glass. Our spirits were in a pretty great place. And then this happened. 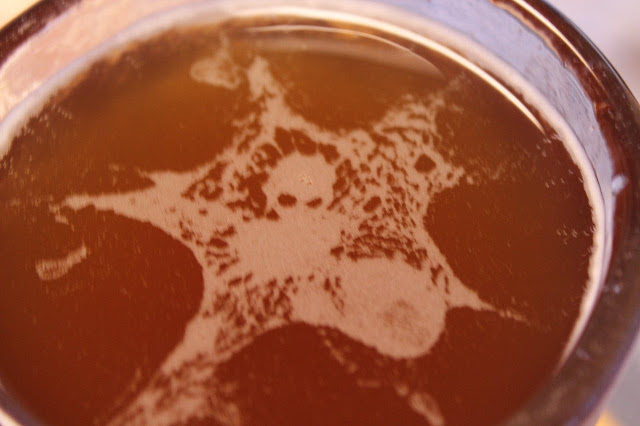 There, in my beer, was an alien skull peeking out the center of a spider web. I don't know what it means. Yet. But I can only assume it means things are badass awesome. And I get to drink it up.
Email Post
Labels: alien coffee craigslist fuel migration posies pushmower