I had a fern. And it lived. And then it died.

This is a story about good intentions. And how a spray bottle and a song can only go so far. And then everyone dies.

I grew up in the Redwoods. Never seen one? Go to a park. Lay down in the grass. Watch out for dog poop. Or goose poop. Let's try again. Go to a park. Bring a blanket. Lay it down on the grass, being mindful to not put it on top of or near the feces of any animal or fowl. If you’re in a wide open meadow, you’re in the wrong spot and that won't do. So pick up your blanket. Leave. Go find a park with trees in it. Spread out your blanket, once again mindful of feces, lay on top of it. Good. Now look at this picture. 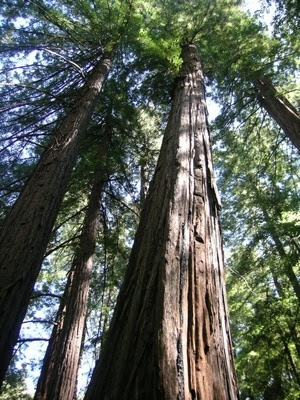 That’s what the Redwoods look like. You’re welcome to remain on the blanket for the duration of this story. Up to you. You’re actually probably in a pretty great spot now, unless it’s raining. In which case, I’m sorry.

Surrounding the wide perimeter of the Redwoods are ferns. A gazillion of them. California maidenhair ferns (Adiantum jordanli), Deer Fern (Blechnum spicant), California Polypodi (Polypodium californicum), Licorice Fern (Polypodium glycyrrhiza), and the Western Sword Fern (Polystichum munitum), to name a few. You know. Your favorites. The ones you’d invite over for a girls’ night with facial masks and popcorn. The ones you’d have be your second in a bitchin’ hot rod race against the Scorpions and who you end up needing to rely on when Putzie smashes you in the head with the car door. Oh Putzie. The ones you dream of at night (the dreams of running scared snotless through Jurassic Park because your subconscious knows that it was filmed in the fern-covered slopes of Fern Canyon). 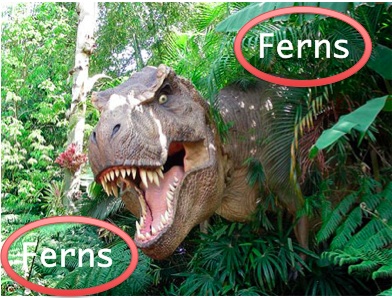 I love ferns. Both of my kids know to gently lift up a frond and inspect its underside for spores. They’re like little candy buttons that you must never ever eat.

I wanted ferns tattooed on my flesh once. That ended badly.

I wanted a little girl named Fern, less Charlotte’s Web-ish and more dominant ground cover of the rainforest-ish. But my little girl is much more Sugar Magnolia than gangly fern frond.

I wanted, more than anything in the whole wide world (save an orange Vespa and a liveable treehouse … and world peace …) to have a potted fern of my very own that I didn’t overwater, didn’t dry out, didn’t accidentally feed to the chickens, or didn’t use as an incense burner a few too many times.
So I gave it a go. I bought a 6 inch potted fern from the fern store and brought her home. I misted her daily from the yellow water bottle that I bought just for her. I talked to her. I sang to her. “It’s not unusual to be loved by anyone.” I tickled her under the fronds. And she thrived. Which is to say, she lived.

I posted a few updates along the way, for anyone who may have been paying attention:

I’ve kept a fern alive for 9 months. 9 months! That’s it. This time I’m really going to buy some champagne.

And then the updates stopped. Maybe it’s because I said I’d buy champagne and never really did. Maybe cause Tom Jones is my cup of tea, but not a fern’s. Maybe I tickled too hard. Fern began to fade.

I gently pulled out her withered tendrils, shushing her, petting her, saying “it’ll be okay, it’s like getting your toenails trimmed. Or liposuction.”

Still, she faded. So I wrapped my arms around her minty green pot and gently carried her to the back door. I opened the door and set her just outside it, where she’d be covered enough to not get pelted by hail, but exposed enough to soak in the sideways rain. I held back from whispering “Go on. You’re free.” and instead simply looked at her, lowered my eyes, murmured a sad “I’m so sorry” and then pleaded with the giant cherry tree in the yard that he’d look over her, be her protector, and if, could he pretty please pretend he’s a Redwood cause she might really kinda like that. But he didn’t answer. Just squeezed out a bit more sap onto the petrified mushroom stuck on his trunk. Disinterested bastard.

Daily I’d pass by my dying, and then clearly dead, fern. The back door is my main point of entry into my house and so at least 4 times a day for several months I’d stand inches away from the shriveled gray fronds, fumbling for my keys, balancing kids, a dog, a dumb cat, a 30lb purse, a green smoothie, and I’d enter, or exit, or linger, and still she’d sit. Totally dead. Right there. The back patio magic didn’t serve to rekindle where I had failed.

Energy is real shit, yo. And what you put out there, you get back. So in a meandering babbling convo one night, (in a word, unsober), it occurred to me that the energy that was stagnating by my backdoor was no bueno, and I was submerging myself in it multiple times a day. Standing, dwelling in a stale energy of failure and dead fern. And wouldn’t it make sense to stop fixating on the dead fern by my door and remove it? Sure. Logic. Death = unhappy.

I carried the sad remains of my fern to the community compost bin in the driveway, the one that's constantly covered in ants. I emptied her in to mingle with the coffee grounds and veggie scraps (and another dead plant from the patio ...). Immediately the energy changed. I hung a chime on the door so that every time the kids slammed the door it would slam with a jingle, like putting a kitten poster up in a halfway house. A little bit of light and whimsy to counter the yelling and slamming. Then a gift was sent to me. A colorful doormat made from recycled flip-flops. Poof! Just like that it was there. I felt the ghost of my dead fern pass like a mist before me and hum as she crossed by my ear “I am composting beautifully. Go well, Tom Jones.”

And I was so moved that I didn’t bother to explain that I only sang his songs, but I wasn’t really him.