Off the court and out of the park.

Do you love basketball? Does the smell of a waxed court fill your olfactory memory with elation? Does the random squeak of rubber soles pique your eardrums with a reverberating excitement? Does the constant action, the up the court, down the court, the flying high and crashing low keep your glutes squeezed in anticipation? Do you ride the front of your seat with eager abandon to not miss a single second of the action as the score is at a constant neck and neck battle? Do you hone in from your nosebleed vantage on the bicep tattoos of saints and dearly beloved mothers? Do you seek out fellow fans and congregate in hoops-centric hipster bars where they serve you curry popcorn and $8 bar nuts? Do you plan on scheduling your vasectomy for March so you can tuck back into your overstuffed microfiber couch with a bottle of vicodin in one hand and a remote in the other (and an ice pack on your manly bits)? Do you thrill at 82 games of big-screen domination? And then a 3 month playoff span?

I thrill at baseball. And I live in a city that absolutely doesn't give a rip about it. I grew up in an era of superheroes. Will Clark. Cal Ripken, Jr. Nolan Ryan. Matt Williams. Mike Piazza. Randy Johnson. Edgar Martinez. The Big Cat. Chipper Jones. Kerry Wood. And yes Barry Bonds. They had their glory. They had their finale. They had their fizzle. But these guys, among so many others, set the stage for a passion in an age when the sport was waning in fanship due to politics and money-grabbing. But they were amazing at what they did.

Have you ever watched a perfectly executed double play? Gah. Sexy. The chemistry and precision between a 1st baseman and 2nd baseman to turn a double play is as fine an art as exists in all of the universe. ALL THE UNIVERSE she roars. Omar Vizquel and Roberto Alomar, for instance. I wasn't (and am still not) a Cleveland fan, but Baseball Tonight was over-the-moon with coverage of  they're-dynamic duo fielding.

The relationship that exists between a pitcher and a catcher is on such a high intellectual level that one can't help but wonder what would happen if those brains were harvested and applied to a field of greater social influence, like, science and technology. But as it is, it's all for baseball. And I'd like to thank you for keeping your formaldehyde hands off their brains, thankyouverymuch. The depth of knowledge a catcher must have about the sweet spots and weaknesses of the batters they'll face each game, what pitches they historically can't hit, which ones they do, who's next in the lineup, who's already on base, where they are in the count, how many pitches have already been thrown, if there's anyone warming up in the bullpen, and lord knows what else, it's just staggering.

Basketball bores me. Big fat yawn face. I get it. The game. More or less. I was a cheerleader for it a couple times in my early life. I went to college games. But I never understood the passion behind it. Just as so many millions of Americans have no clue why I'm so passionate about baseball. I say, "What's so great about basketball except the last 2 minutes?" And they'll respond with "What's so great about baseball except a game that's filled with home runs and fights on the field?" And I'll lay out a list that looks something like this: 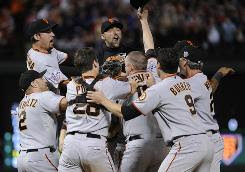 I'm not trying to be a hater. Because I don't really know what that means except it sounds douchey. I'm a big fan of being a fan of something. Anything really. Be a fan of lacrosse. Be a fan of soccer, or hockey, or ice skating, or diving, or even NASCAR (wait. I didn't mean that. I have strong feelings to the contrary about the environmental waste that accompanies good ol' fashioned gas-wasting). But be a fan. And if you're a fan of baseball, let's go to a game. Volacanoes games in Keiser are super fun.

And if you're a Giants fan, let's hug.