The Other Side of Sadness, part 1

There’s a ravine, perhaps it’s a gully, I’m not really sure of the difference. It runs a 3 mile stretch along Barnes Rd, just feet away from the cars who tackle the hill to avoid the freeway.  Though, at the end of the day, it doesn’t actually save time. It’s just a more interesting drive. No one really cares to stare at the broad backside of a Dodge Sprinter while going 5 miles an hour on a long stretch of suburban freeway. But a winding rode that ascends the horizon and hugs the length of a pristine Catholic cemetery --gravemarkers flush with impeccably manicured lawn -- is a welcome diversion to reading the same One Man, One Woman bumper sticker for 8 miles.

And when the road completes its drift beyond the comfortably buried, it begins a caress with this ravine. Like a teenage arm cautiously stretching toward the fingers of another, and then gathering courage, sliding up forearm, then bicep, then shoulder, and then ultimately around to the other side in a lush embrace. Then a relieved sigh. It’s a lovely match. 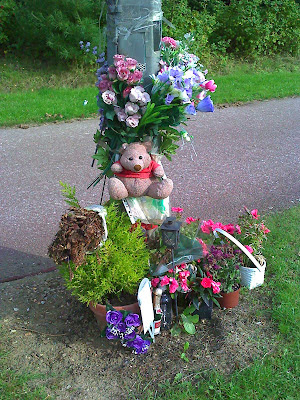 The magic of the hillside is that it seems to float just above the city. Hovering really. Far enough removed to not smell of industrial paint fumes. Close enough to have the spark of art and chemistry. So it’s little wonder that nestled in this gully is an unlikely trio, who’ve set up camp and called it home. They reside on the Other Side of Sadness, just yards away from the Subarus and Civics that shuffle past on the road above. Mothers sigh, momentarily at peace with the interior Apocolypse that landed on the upholstery the day their child first learned to hold a sippy cup. Like a gummie bear that swallowed a live grenade and gleefully exploded. Children’s faces smear and smudge Star Wars stickered windows as they gaze out into the gully, dulled by the passing green, hypnotized by the flicker of sun rays that break through the branches and the ever-present cloud cover. And then the hypnosis is broken, their eyes pop open bright, they peel their cheek from the sticky window with a smack, and declare “Look Mom! Christmas!” and thrust their red and puffy finger, still dripping with drool toward a tree. And there it is, wrapped in shiny garland, decked in silk flowers, and wearing a forelorn stuffed bear, strapped tight to its trunk. A whitewashed wooden cross leaning lovingly at the roots.
Email Post
Labels: barnes road dodge sprinter portland roadside memorial