What we do here.


Fraggle Rock (<-- reminder, that's where I live) is not a big house. Not at all. It's 2 bedroom, 1 bath, and a half basement. It's old. The siding is in need of replacing. The concrete walkways are losing the battle to the weeds that are pushing up from beneath. The shed is only partially waterproof, which is to say, it's not really waterproof at all. And from where I sit, the house may be built ontop of a very large, very disrupted, very ancient and powerful ant hill.

The kids share a tiny room off the side of the kitchen. I wonder if was originally meant to be a bedroom at all. Their bunkbeds are tucked up tight against the wall, blocking a good portion of the light that could come in from the large windows. Their toys are stuffed into and spilling out of bins under the bottom bunk. Their dresser is overflowing with clothes that I must must must go through soon, to stash away long sleeved shirts and heavy pants for winter. The dresser itself has been begging me to give it some love. The drawer pulls are original antique wrought iron, but a few are missing. And the spacing of the holes is such that I can't seem to find replacements. I know I need to just take them off, fill in the holes, sand down the dresser, paint it fresh, and put in new pulls. I also know that first I need to gut the dresser, go through the clothes as previously mentioned, and then finish the dresser while the kids are with their dad. I also know, we'll survive if this never happens at all.

Because their room is so tiny I've set up a space in the basement. This has largely been River's special space. He has the art desk, kindly loaned to him by Tim. And the red triangle shelf given by Gina right next to it, piled high with paper, pens, stickers, pipe cleaners, toilet paper tubes, paint, etc. River can happily sit there for hours drawing sketch after sketch of landscapes and superheroes and earth-digging machines or a face with a dialogue bubble that says "I am sad". And when that wears thin or he's run out of posterboard or Scotch tape, he'll climb down from the art desk and take a seat on the purple shag carpet in front of his Lego table. Dear Lego, thank you. Thank you for staying true to yourselves and growing generationally without losing your core creative purpose.

Maggie will sometimes hang out in the basement, too. But usually it's to hide behind the silk panels that I hung between the art space and the hot water heater. Or to dig through the box of Halloween decorations. Or to sit on the sit-n-spin til she wants to throw up. She prefers the upstairs.

The living room is an "L" shape. Technically, part of it should be a dining room I suppose. But I don't have a dining room table. Just a bistro table in the kitchen that seats 2. So the kids will sit and eat while I'll stand. Or we'll set up a floor picnic. Somehow, we still manage to feel full despite the lack of a dining room table. In the part of the living room that's the upper part of the "L" the kids have more space to spread out. A shelf that I painted years ago holds two large baskets of books. Instruments are piled inside an apple basket, which I think never did hold apples, but instead chocolate originally from Trader Joe's. Near that is a taller basket that holds their taller toys: swords and shields, pony heads on sticks (which makes me wonder why they never made pony bodies with sticks for heads, just to keep things fair). A large coffee table holds the worlds coolest dollhouse ever. The only thing I ever won. It has functioning solar panels! All it needs is a bike rack out front, a vespa in the driveway and conga drums on the roof and I would move in. Don't care if you say I wouldn't fit. Do. Not. Care. Also, there are conga drums on the roof. And a peacock.

The kids have a costume box in the same room. It's plenty of space for them to pull out everything, including the scraps of denim and tulle they've saved for when they pretend their mermaids (River, too). The feathers from the boa fly everywhere. Every time. And I swear one day I'll throw it away. But at this point, the curiosity of how long exactly it can continue to lose feathers without ever appearing less feathery is keeping it out of the garbage bin.

The lower part of the "L" is where my lovely but tattered vintage couch sits, often smelling of dog. The springs in one part are shot. the thick threads of the upholstery are beginning to fray or come unstitched entirely. I know its days are numbered. And it makes my lower lip quiver a bit. Still. The kids and Tim (and Dexter and Tamale Party) and I still manage to sit on it. Just fine. Sitting is indeed accomplished at Fraggle Rock.

From here we watch movies on the magic t.v. (thank you Rae Ann). There's a unicorn inside the t.v. and from time to time it turns the picture all kinds of wonderful colors. Buster Posey goes turquoise for a bit, then pops back into orange and black. Angelina Ballerina trades in her pink tutu for one that's aqua blue and flickery. Funny how we can still watch it. HD what? We. Have. A. Unicorn.

And there's my room. There's s smallish chipped white bookcase. Books on the bedside table that are seldom opened these days. Closets filled with clothes that still fit (barely), but are far from new. And at the top of the closet, an empty box lays on its side. Just a box. A box that traveled with me from Arcata to Portland in 1997, and from house to apartment to house to duplex to house to house to Fraggle Rock in between.

It's just a little house with grass that grows too fast. With raccoons that have just vacated the eaves (for now). With an outside ant problem. With a long driveway perfect for chalk paint. With good neighbors. With a jungle in the corner of the yard. It's not mine. But still we manage to live here. Really live. And as I look around me, at what for I time I was quite afraid echoed too much of me and not enough of we, I realize that is not the case at all. This is our place. Fraggles, doozers, and Sprocket, too. 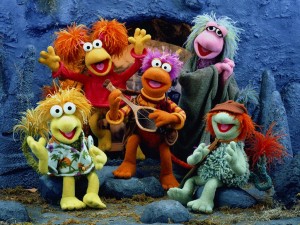