So last week I had an epiphany whilst I was not successfully lathering in the shower. I was going to rid myself of one boxed mac n cheese problem AND all in the same crazy breath would diversify the culinary palette of my kiddos. In a hashtag: #newfoodnight

I told the kids about my idea. It went like this:

hey Riv! you know how you want mac n cheese like every single night, and how I allllways roll my eyes and say no?

well how about instead i let you have mac n cheese once a week. for sure. how about on thursdays?

and you'll have a vegetable with it every time.
(which just a day later would turn out to be an accidental lie ...)

and here's where i went on to explain the concept of new food night. and he emphatically nodded throughout at the following:

Let me expand on this a bit. The key motivator for this idea is to get them to chew their way out of a rut. New food night would not be about us finding the weirdest dishes we've ever heard of with ingredients that we have to go to niche shops to find. It would not be us cooking everything from scratch just so we could say we finally used every dish in the kitchen at one time. I don't want to lose them in complexities (the awesome awesome complexities of cooking from scratch) but I DO want to emphasize that there's other food that tastes awesome that doesn't come with a packet of powdered cheese. I want to keep their attention on this project first, and if it means using pantry items and frozen corn to get there, hell yeah.

So at dinner on Thursday, with the steam rising from our mac n cheese bowls, I got out my phone and pulled up the AllRecipes Spinner App ("app" doesn't feel like an appropriate word for me to admit that I use. Like a great grandmother showing a department store full of black friday shoppers that she knows the word "bitch".). We chose soup. Then we hit spin.

Then we chose dessert, chocolate as an ingredient. We skipped a few of the app suggestions and then decided on a chocolate pie. It had marshmallows in it. For pete's sake. Marshmallows in a pie. Gah! It was like the app was made for a 7 year old boy and 4 year old girl.

So there was our menu. Shopping happened at Trader Joe's where I got to chat with an old friend in the checkout line. I bagged my own stuff cause, you know, I'm good at it.

New food night was going to happen on Saturday. And, bonus, we had decided to go sledding that day.  Fun fun sledding day up on Mt Hood. Grabbed a gigantic maple bar from Huckleberry Inn along the way. Sledded our asses into a new shade of awesome. Then slid on down back home.

Maggie and I started working on the pie first. Here's the recipe, but we didn't really follow it. Ours looked NOTHING like that picture. Nor can I really type out exactly what I did, because I kinda winged it. And this is why I'll never ever be a food blogger.

Instead of a graham cracker crust I got the frozen pie crust from Trader Joe's. All those near and dear to me know that I'm a pie crust nerd. I make my own scratch crust. Fairly often. I boast about it. I love making it. It's my mom's recipe that I still have written down on the back of my syllabus from Humboldt State. It's. The Shit. But the point of all this, remember, is not to focus on the details of a perfectly kneaded butter crust, but to allow the big picture to be seen. So. Frozen crust. This time.

Maggie and I broke the chocolate bar into a glass bowl. It didn't look like enough so I put in some chocolate chips too, a fistful or two. It called for 5 jumbo marshmallows. I only had mini ones. So I imagined a jumbo marshmallow inside Maggie's fist, figured it would fit just about right. And had her toss in 5 fistfuls of the mini-mallows. Then we put it in the microwave to melt.

Then I realized I hadn't thawed the pie crust. Cause it was frozen remember?

So we took the chocolate out of the microwave until the dough thawed, which dammit, was probably an hour and a half away. 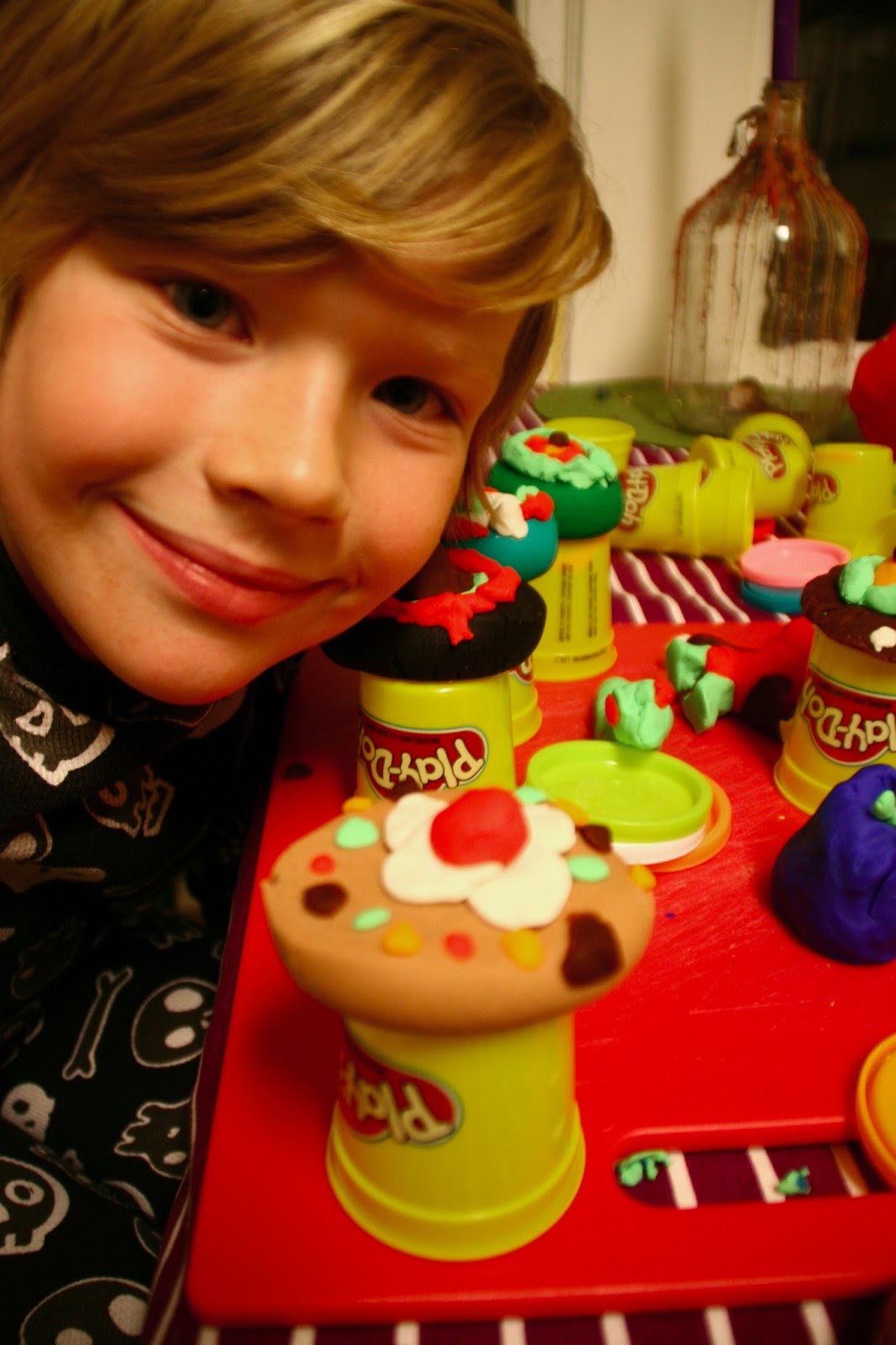 We got ready to make the soup instead. River and Maggie both came into the kitchen. There wasn't much for them to prep, so I suggested they go get their new gigantic pack of Play-doh that they got for Christmas. New Play-doh as you know is almost as good as new socks. Or a new pillow. Or new underwear that fit just perfectly even though your ass looks like it's 35 cause it is.

And then the magic happened. I say magic because it's the best word that I can use to describe a scene of such pure human bliss as the one that happened on the inaugural New Food Night. The Play-doh was out, in its full squishy neon glory. I put on some Erasure, because if Erasure* was a color, they would be a full rainbow of squishy neon Play-doh colors. River made a whole set of flower-decorated cookies for Magnolia. Then he made a team of monsters. And all the while, I was cooking us dinner and singing along to Blue Savannah Song. This is a video of not that but way better. 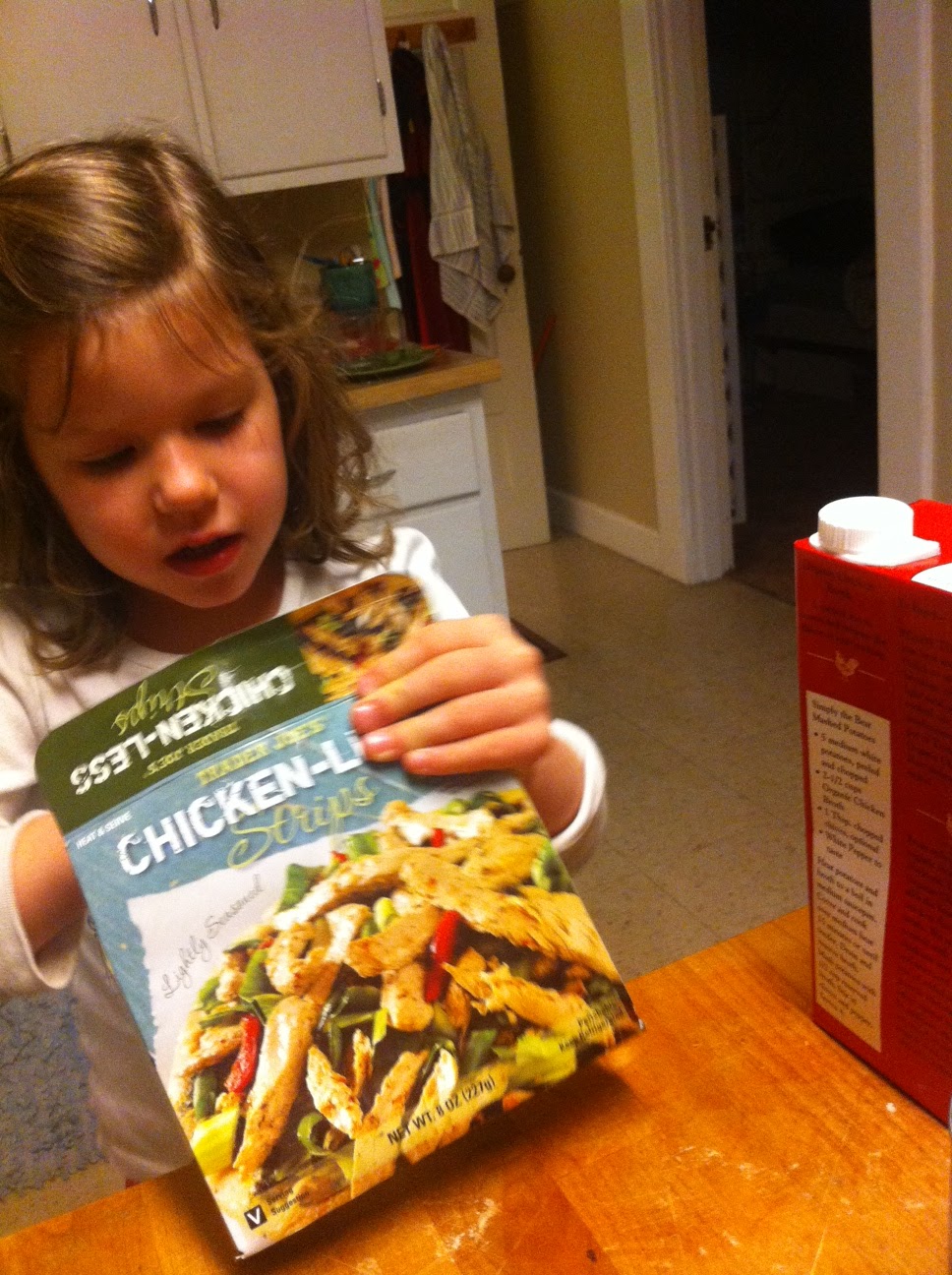 Here again is a recipe that I didn't follow. Soup recipes are meant to be an inspiration, not a hard and fast doctrine. I don't eat chicken, so I used the "chicken-less strips" from Trader Joe's. I used frozen corn. Canned fire roasted tomatoes. Canned green chilis (though I at least diced them myself which counts for some kind of effort, right?). Stirred in 1/2 cup or so of rinsed white rice, brought to a boil and then let simmer. Should've added cumin. Didn't have any, which was odd. So we pretended we added cumin and then imagined it as a flavor later.

I cut up some corn tortillas into strips, fried them up in the oil. Maggie made some Play-doh eggs. They told each other really bad knock-knock jokes. I told a crossing the road joke of my own:

Why did the knock knock joke cross the road? To see who's there.

They thought it was hilarious. I was winning all kinds of mental mommy awards. It was good shit happening at fraggle rock on new food night.

With the soup simmering, I unwrapped the pie crust dough. It crumbled. I hadn't thawed it enough. Or properly. Or I just should've made my own crust or whatever. So I smooshed it all up into a ball and re-rolled it. Thing about frozen pie crust is that they only give you just enough to cover the pie plate, so if you re-roll it yourself, it's not going to be as pretty. It might not even cover the plate sufficiently. But we went with it anyway. Cause a pie was at stake. 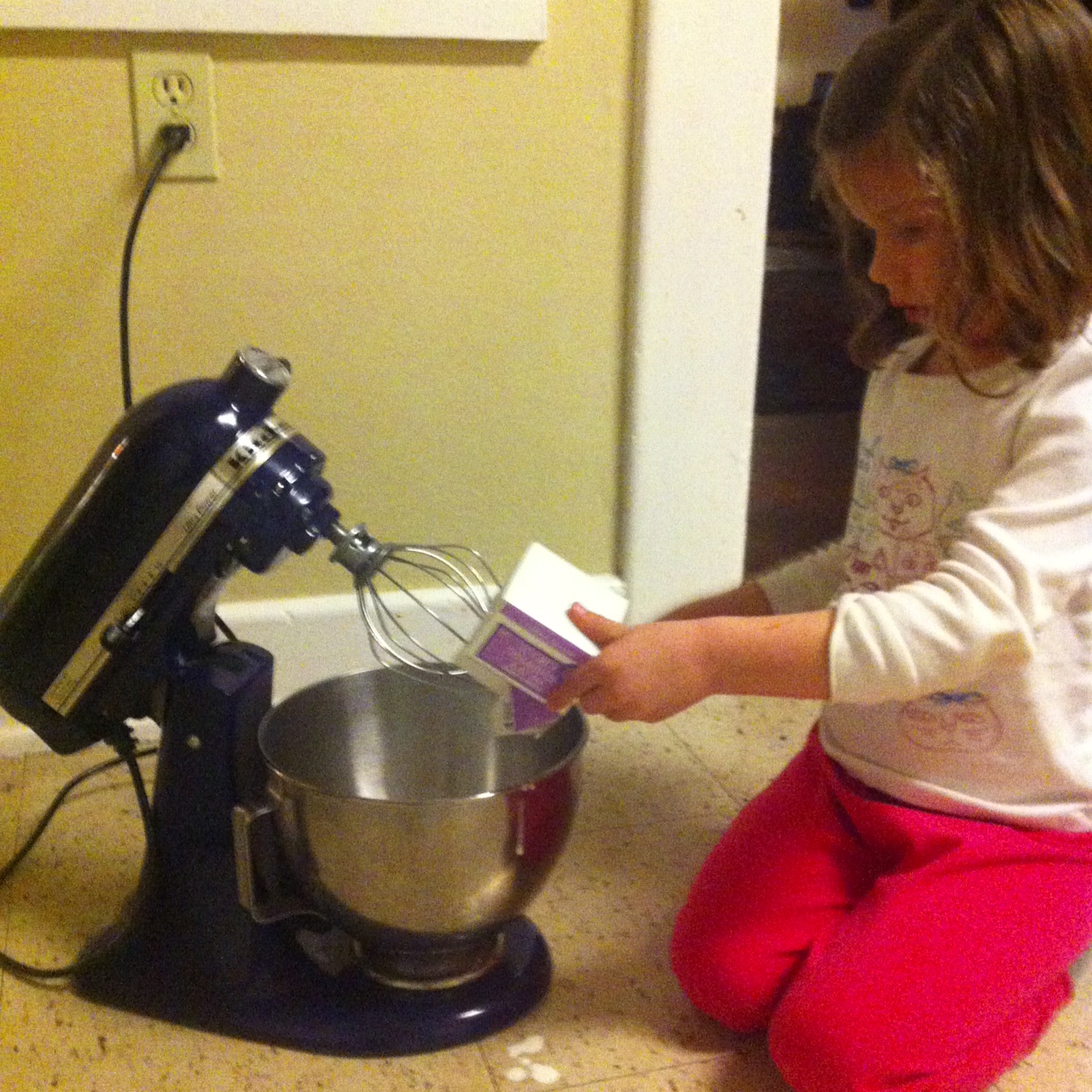 With the dough slapped into the pie plate, Maggie and I returned to the project of melting up a big bowl of chocolate and marshmallows. She stirred and licked her fingers (so heads up on that people that I fed this pie to). I got out the KitchenAid, set it on the floor to plug it in as you do, and whipped up some heavy cream to a nice froth, then folded it into the chocolate mixture. We added a splash of vanilla, a dash of cinnamon, a hint of ground cloves, stirred it all up, poured it into the pie crust, and popped it into the fridge to set.

I diced up the world's freshest straight off a California billboard avocado, scattered it across our bowls, stuck in some freshly crisped tortilla strips and a dollop of sour cream and ... we ate. Happily together. At the table. Giggling, but not in that out of control way that you know will end up with someone crying cause they got a fork in the ear. Maggie hesitated with the avocado cause it's not delicious enough for her. But ultimately she gave in and ate a hearty amount, paving the belly way for a slice of chocolate marshmallow pie. 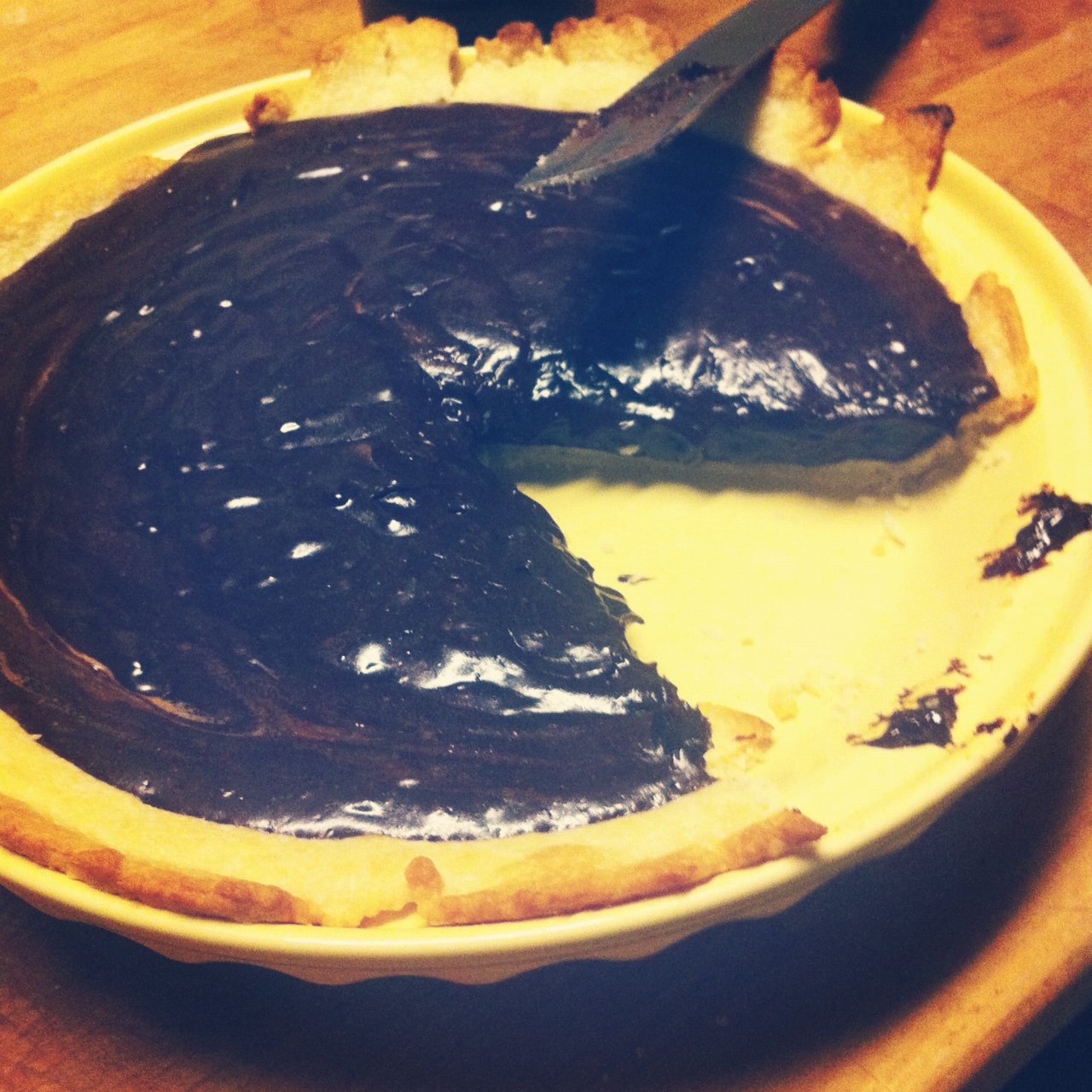 We retired to the couch and put on Mirror Mirror, River's choice because he thought Maggie would enjoy it (!!!). We ate some delicious pie that you wish you had right now. And then, with a sledding day behind us, new food night nestled in our bellies, Maggie fell deeply asleep in my arms. And so River and I, peacefully, watched Julia Roberts try very hard to be all evil and magicky.

Next up ... new food night part 2! with friends! We'll be cooking up Ethiopian food with some rad friends of ours a couple Saturdays from now. We are ALL very very excited. And the cupboards are well-stocked with boxed mac n cheese.

* Erasure Situation - here's what that is. I told Tim that it wasn't very long ago that Erasure came to town, at the Crystal Ballroom I think it was. And I was bummed that I couldn't go. Because even though most people can't wrap their brains around the uncensored beauty of 90's synthpop, it was still a guilty pleasure of my teenage years. And I know that because of the latter, Tim would go see Erasure with me if the chance came up again. Just as I am going to see Tomahawk with him next month. Except that Tomahawk's leading man, Mike Patton, is hugely more legitimate as a musician than Erasure for lots of reasons not the least of which because most of  Erasure's songs were originally written by Abba. But anyway, that situation wherein you have a loved one or friend that digs you so much that they would go see Erasure with you, or Justin Bieber with you, or Bob Saget with you, THAT'S an Erasure Situation.