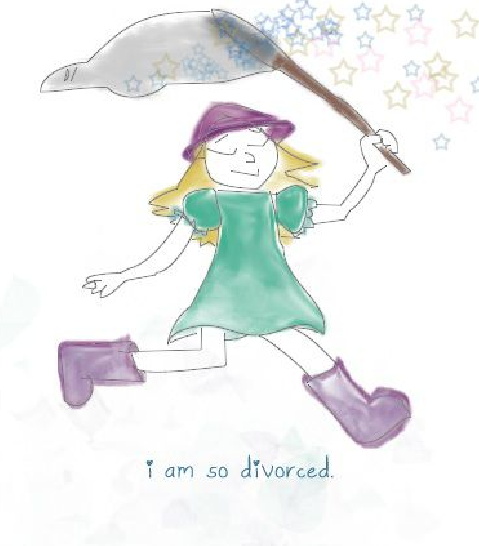 Over 2 years since beginning the process of ending a marriage; it was finalized on Thursday with this grand and celebratory statement:

A General Judgment was entered in the register of the court in the above-noted case on March 19, 2013. This judgment does not create a judgment lien.

This notice is sent in accordance with ORS 18.078.

The government doesn't mess around with pomp and circumstance and, you know, commonly accepted words of social understanding. So I called them on the old fashioned cellular telephone.

me: "Does this letter mean that I'm divorced?"

So that was a long and laborious process just to be un-married. I'm pretty sure lawyers are getting a kickback from the courthouse. The forms are incomprehensible, the process vaguely documented, the court-provided assistance available between the hours of 1 and 1:15 pm, every other Boxing Day and only if it's raining. It's no wonder there are so many divorce lawyers. It cost me 34 gallons of frustrated tears to get through this process, a price that I would have happily forked over to a a lawyer IF ONLY THEY ACCEPTED TEARS AS PAYMENT.

But you know what, as the official robot spokesperson for the county courthouse confirmed over the phone with me the other day, I did it anyway. I am so divorced.

I did it. Without a lawyer. Without paying anything except the filing fees. My ex and I are friends, which is incredibly helpful when splitting hairs and pulling teeth, but it's not like the other circumstances around our divorce was all color inside the lines and win a prize kind of simplicity. We have children together and will be splitting custody in halfsies. We have a house that, though it rots under the weight of its own bad investment strategy, is still in both our names. We have debt like most proud Americans do. It took multiple revisions, trips to the courthouse, patience, and 34 gallons of tears (which I may have already mentioned). But above all, it took support.

We, the previously married, are not entirely represented, even though we are a statistic that dominates the US census bureau. And without representation, there isn't much by way of information resources. Google "how the hell do I get divorced?" and you'll get assaulted with ads for divorce in 3 simple steps (plus your wallet, your lunch money, and your first-born). Don't go there. Unless you have piles of lunch money and multiple first-borns, like Mrs. McCave. Where is Mr. McCave anyway? Pretty sure he bailed a long long time ago. But Mrs. McCave was overwhelmed by the paperwork, so she just stuck around.

So here are my words of lessons learned, just in case you are 100% certain you want to go down the daunting path of disentanglement. If you're happily married, my blessings are upon thee. But if you know someone who could use some support, please share. If you're looking to be convinced that divorce is for you, don't look here. Go to counseling. Go for a run. You'll figure it out.

When that day comes and you can finally celebrate the end of the process, draw a picture of yourself prancing merrily in purple rainboots while catching stars in a butterfly net. Embrace your badass self and know that your identity is not whether you're married, divorced or somewhere in between. You're not the first to go through this. And neither was I.