New Food Night #4 and a bottle of peanut oil

Last night was New Food Night. New Food Night is something we began a few months ago as an agreement between me and the kids. They wanted mac and cheese every night for dinner. I was tired of always saying no, and frankly my eyes were getting sore from all the rolling. So we struck a deal. Every Thursday we'd have mac and cheese for dinner. And ONLY on that night. And in exchange, we would have a night where we would pick a menu together, shop for the ingredients together, and cook together (or at the very least be present in the kitchen together). We would also make a dessert that was new to us. You only got to eat the dessert if you ate the other items from our New Food Night menu, too. That was the arrangement. And it's been awesome. But it's also been several months now since we've had a New Food Night. And it's been several weeks since we've had mac n cheese. So I call it a draw. Last night we had yuca and sweet onion crab cakes, coconut rice, braised greens, and a mango bread pudding for dessert. Maggie was off at her BFF's house watching Strawberry Shortcake and eating mac and cheese (oh the irony). So it was me and the boys. The Riv, the Cransky, the TJ, and the Dexter. Dexter even kept to the "must be in the kitchen" part of the agreement by being constantly underfoot the entire time.


But you know, I'm not a food blogger. I'm not going to lay out the details of our meal. And frankly I spent quite a bit of the evening being frustrated at my 8 year old son's attempt to show up his mama to the men in the room with sarcasm and what he thought was a good humored testing of boundaries. But amidst the frustration, the oil spatter burns, the dog underfoot and the general feeling that New Food Night is a fun thing pretty much only for me, there was a moment. One of those moments when the boundary-testing and sarcasm got buried beneath something much more profound and lasting.

When Riv and I got to Tim's house to cook dinner that evening, I unloaded the ingredients and realized I'd forgotten the peanut oil at home. So I asked River if he wanted to run home with me really quick to get it. It was only a few blocks away and a bit of a silly car ride, but I asked anyway. He misheard me and said "Oh, yeah, yeah I can go I think." I raised my eyebrows and said "Oh? You want to go by yourself? You sure?" And he said yeah. And so I gave him my house key and he verified that he knew which lock on the door was the one I always locked. I explained where the peanut oil was. I told him to grab a reusable bag to carry it in. He asked why. And I said because you need to keep both hands on the handlebars, duh. And then off he went on his bike, spiked helmet jabbing the sky with authority. I began to mix up our crab cake mush. Tim wandered into the kitchen and said "Hasn't he been gone a long time?" and I said "No. It'll take him some time in the house to find the oil and get the bag."
Another five minutes or so and I finally started to look out the window, too, to try to catch a glimpse of him riding back up onto the lawn. And there he was. He had the Los Bagels tote bag on his back like a backpack (instead of around the neck thankgod) with the peanut oil safely inside it. I met him at the side door with my camera ready, cause ohmyfreakinglord I was just bursting with pride. It's THIS, this kind of moment that is worth all the uneaten braised greens and complaints about baseball practice. And then Riv said "Oh, and I ate a Z-bar while I was there. And some Cheetohs. But I cleaned up after myself."

The crab cakes were pretty good. The whole dinner was pretty yum, actually. But the most delicious thing about New Food Night this time was a moment when my 8 year old kicked ass at flying solo to get the forgotten peanut oil. Heads up, Riv. I have a lot more forgetting in my future, and I'm gonna need you. 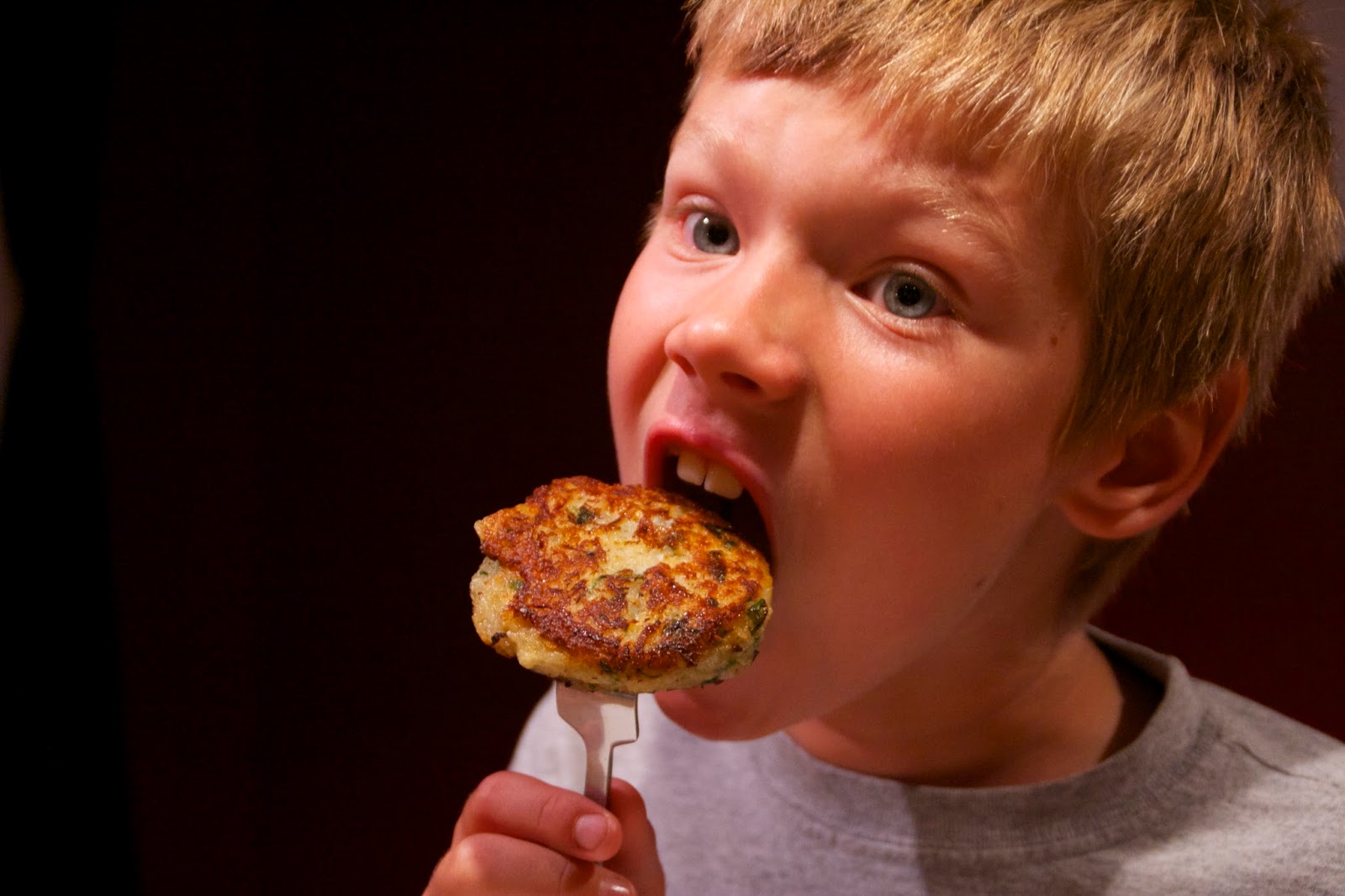