So yesterday Cransky and I went tromping through the woods with baskets and knives (along with the Crocodile Dundee of mushroom hunters. We'll call him Mark.) Markodile Dundee made sure we didn't eat anything that would make us barf. Very kind of him. Also, I saw a chipmunk.

We emerged with more chanterelles and hedgehogs than I could have hoped for: 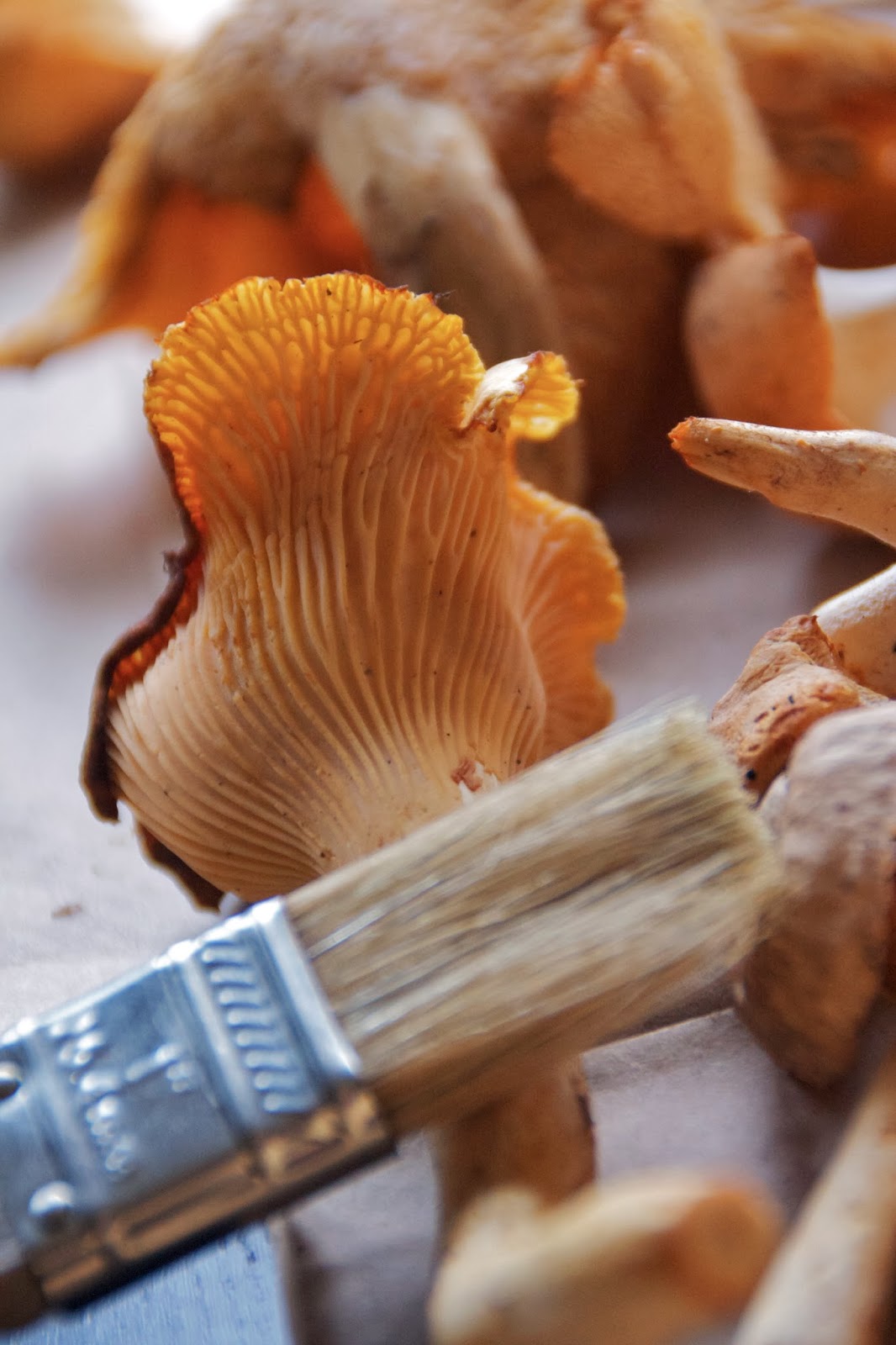 After spreading them out and letting them dry for a bit, we busted out our brushes (I used a sturdy-bristled basting brush) and dusted off all the pine needles and dirt that we didn't have the foresight to leave in the forest in the first place. It was tedious. But I kinda really loved it.

It was getting late, and we weren't in the slightest bit hungry. But we had to have a taste. So I did this:

Heat olive oil and butter in a skillet on medium heat. Cut up the mushrooms into solid chunks, about 1-2 inch pieces (they'll shrink to half their size in the cooking process). Toss the mushrooms in the butter/oil to coat, then let them sit in the skillet (don't stir all crazy like). You'll want to get them nicely seared on both sides. About 10 minutes total. Toss in the garlic and thyme when the mushrooms are getting nicely browned and are almost done.

Remove from heat. Eat with your hands the way God intended. Or put on a black bean burger or rice or whatever, you heathen.

Cransky and I then frolicked off to bed, happily unpoisoned and awoke to Heaven.


I love the kind of recipes that let you hang out in the kitchen, chop and mix, sip coffee or an adult beverage, chit chat with friends while kids throw stuffed monkeys at each other from across the kitchen and the dog moves from constantly underfoot to constantly under the other foot, and likely if you get distracted by the adult beverage or chit chat or monkeys or dog and forget if you already added in the cream of tartar or not, the food will likely still turn out reasonably okay. And possibly even deliciouser. (As my mom might say, "I had a senior moment" and truly cannot remember if I added the cream of tartar once or twice. Meh. Practicing for my crazy old lady years. Coming soon!)

This is the biscuit recipe that I have used since I was a teenager. Recently, in a fit of laziness, I did away with rolling out the dough and cutting it into perfect circles and simply went to pulling the dough apart into balls. Laziness FOR THE WIN!

Pre-heat the oven to 425. Mix together all the dry ingredients. Then cut in the butter. Mix in the butter with a pastry blender, the kind that looks like what a chef would wear if a chef wore brass knuckles.


Make a well in the dry ingredients and pour in the milk. Reach in with your hands and mix it all together, but just til it comes together. You don't need to smoosh out each piece of butter. It's better in fact if you don't. Form the dough into a ball. Pull the ball apart so it's two balls. Pull the two balls apart until they're four balls. Pull the four balls apart until they're eight balls. That's enough balls. Put the balls on a parchment lined baking sheet. Put them in the oven and bake until golden, about 12-15 minutes. Pull them out of the oven and DON'T EAT THEM YET.

(adapted from this recipe from epicurious) 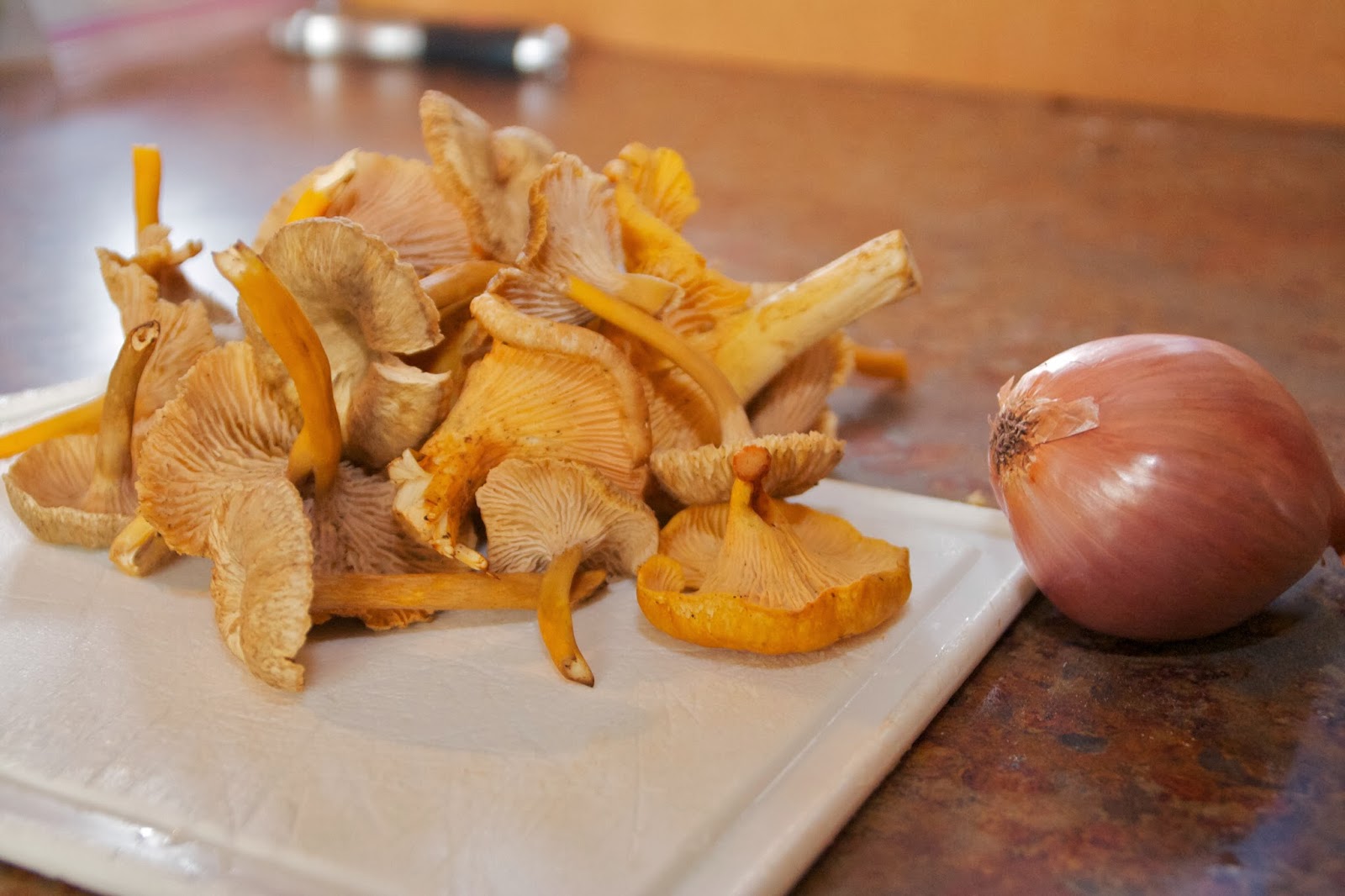 Now, I don't have a kitchen scale, and I really don't know how much mushrooms weigh. So I picked them up in my hands and guessed. Does this look like 3/4 lb to you? >

Cut up the possibly 3/4 lb of chanterelles into biggish chunks. Then mince your shallot. 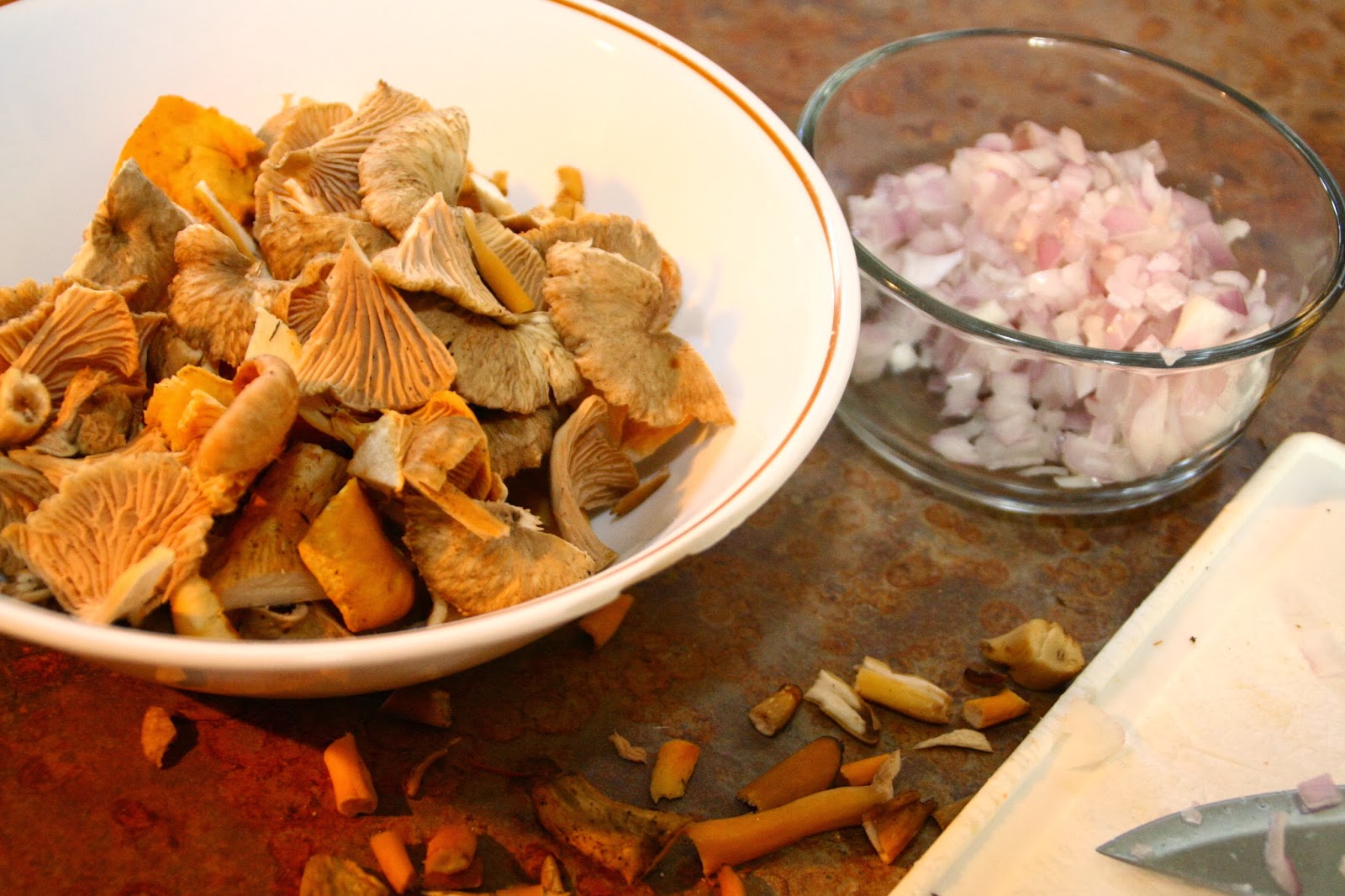 I had always thought that shallots were like the nice girls at school, and onions were like Heathers. Well this little bitch of a shallot made last night's eye make up that I haven't washed off yet look even WORSE. The myth is a lie. Shallots will make you cry.

Melt the butter in a saucepan/skillet over medium heat. Then toss in the bitchy shallot and cook til softened but not brown.
Add in the chanterelles, toss to coat, then let them cook, stirring frequently, til the mushrooms give up their water. Ew. About 5 minutes or so.

Meanwhile, sip your coffee. Whisk together the flour and 1/2 cup of the stock til the flour is dissolved. Set aside. Add in the remaining 2 1/2 cups stock to the mushroom mix in the pan and bring to a simmer. Whisk in the flour/stock goop til the gravy starts to thicken (5-10 minutes). Salt and pepper to taste.

Put the biscuits that you haven't yet eaten on a plate, ladle your dirt gravy over the tops, serve warm. Eat with a fork this time.

Total prep time: I don't know. Under an hour and a half.
Fun fact: If you eat 2 homemade biscuits with chanterelle gravy on them you will have consumed 5 tbsp of butter in one sitting. Math.


Now get out there and forage! But please go with someone who knows what they're doing. I'd hate for you to get pukey or to accidentally eat a Smurf.

Jstar said…
This makes me hungry even though I just ate dinner! I love chanterelles and I pretty much hated mushrooms until age 34.
November 10, 2013 at 9:26 PM

OrangeMew said…
Wow, you really made out with the foraging! I love mushrooms, but don't know anyone who has that kind of expertise that I wouldn't be picking the wrong thing/getting sick, so I keep relying on whatever is in the farmers market. Very jealous of your mushroom haul, both for the amount of mushroom treasure and that since you were "hiking" to work to get it, you totally burned calories to credit sauteing those in butter right...
November 11, 2013 at 12:17 PM

Kelli Martinelli said…
Oh I like the way you think! Except truly, the hiking wasn't a ton of effort. Not 5 tbsp worth. But the thinking that I did over the course of the day may have helped. :)
November 11, 2013 at 12:28 PM

Anonymous said…
Our woodland garden is overflowinng with mushrooms...just wish I knew if they were edible...so come on over...I will even loan you the kitchen for the cooking :-)
November 4, 2014 at 11:38 PM