The Battle for Halloween

He gets the 4th of July, I get Halloween. He gets to light things on fire and cross his fingers that the dogs don't chew a hole through the wall, and I get to make a Dr. Horrible costume and explore haunted houses on N. Portsmouth St. with the thousands of people that all of a sudden seem to live in our neighborhood. He gets to spend too much money on garbage that makes noise, and I get to spend $10 on candy that will somehow stay in my house until all of eternity goes by and a new world begins and then my $10 candy is an ancient, preserved, sticky relic (that the kids will still want to eat).

But this year he asked if he could have them for Halloween. I, of course, don't want to be without the kids on my second favorite holiday. They make it more interesting. I dig in to the folklore of the jack-o-lantern and they give me interesting eye-rolls. I romanticize El Día De Los Muertos and they romanticize the sweet breads. "Grown up" Halloween, with its turn-everything-hootchie parade, just doesn't hold the same appeal. My boobs are happier near my ribs than my chin, thankyouverymuch. And if the glue that holds on the millions of fake eyelashes that come out at the witchingest of witching hours isn't actually a slow but pervasive virus that causes duck faced selfies in dimly lit dive bars, well then I guess it's back to the drawing cauldron, because that shit is doing something.

I really wanted to say no to him. I wanted to spend another spooky, sugar-crazed, hot-glued, magic-pony-rainbow-kitten costume holiday with my little monsters ... before they outgrow it all and start trick or treating as "freshly dead freshmen". (If they pull that crap I swear to all that is unholy I'll tell all the neighbors not to give them candy. Wear a damn costume, heathen children.)

But when their dad and I split up and we were sorting out the custody agreement, we included a caveat. It wasn't written in stone. We didn't spit in our palms and shake on it. But it felt right. Way more right than spitty hands. We each had our set holidays with the kids, and some we would share, but if a holiday came around and one family had made plans that would make incredible memories for the kids, then that would need to be considered, and should be permitted to disrupt the agreement.

And well, his Halloween plan was a good one. There would be travel. Adventure! There would be meeting new sorta-step cousins. More family! Our family has gone through some massive metamorphoses over the last 4 years and we have changed into something intricate, complex, interesting and beautifully functional. A chance to meet an extension of that family would be more valuable than the promise of a pixie stick at the end of a neighborhood hike.

I sent their dad a text and said, "Okay. You can have them on Halloween. But we get to take them to the new Teenage Mutant Ninja Turtles movie AND the next Star Wars. Also, you should give me a case of beer, because that's what friends do."

He replied, "Deal. And thank you."

I won't have my kids on Halloween. But I can still sew hotglue staple buy them costumes. Those costumes will make it into the third costume bin that is routinely mingled on the basement floor with the contents of the first and second costume bins. They'll show up on my kids, the neighbor kids, friends, on the dog, and on the family's baby mannequin mascot, Napkin. And in this, everyone wins. 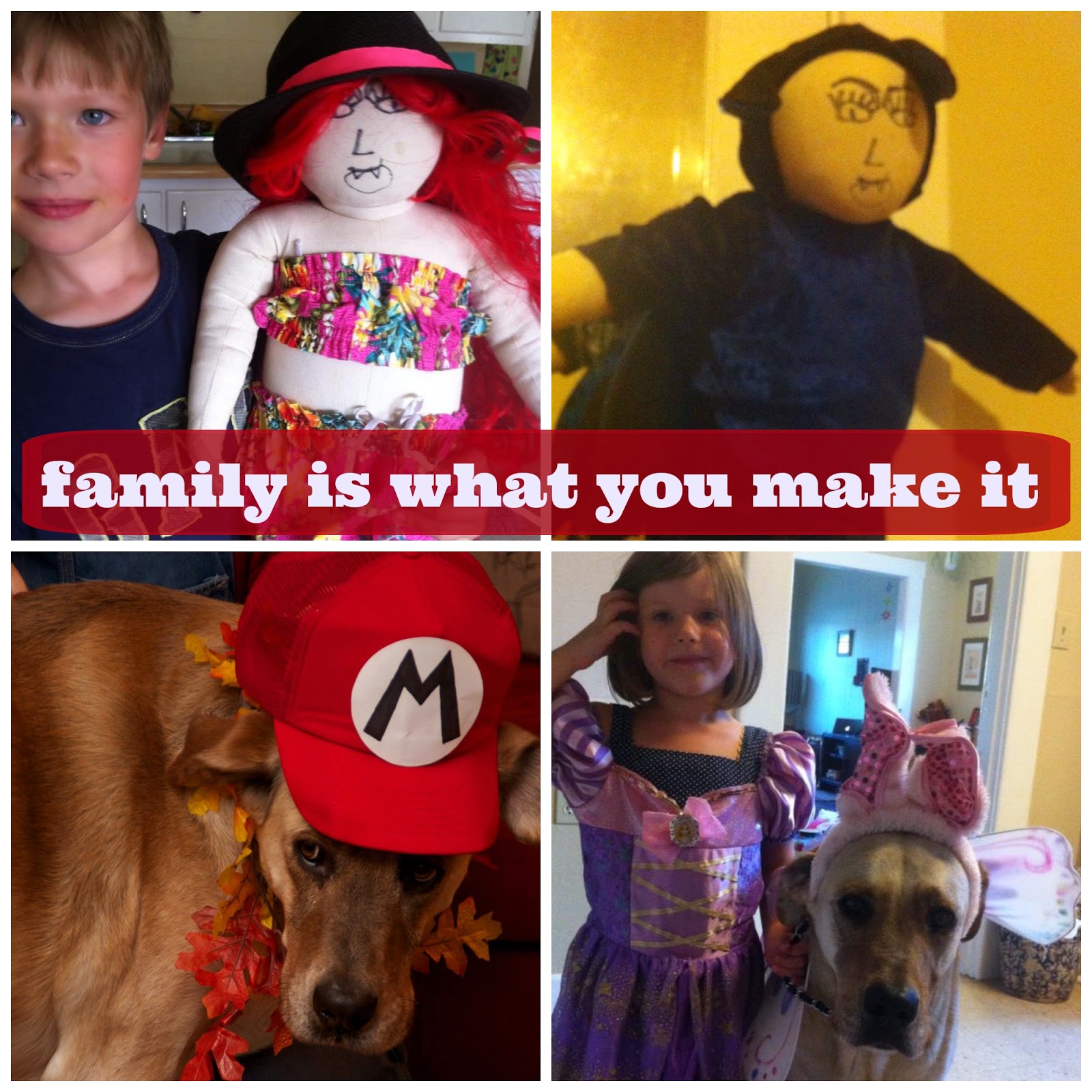 Lea said…
we have that unspoken caveat, now that we're so amicable and easy going. and it's always made me feel good when i get to say yes to something that will be really good for tabor. do i miss him? always. but his dad would be missing him, too.
September 4, 2014 at 4:06 PM

Unknown said…
But, you can have a pre Halloween, Halloween party! We always did that as kids! The neighborhood kids would come over, we would dress up, play the ghostbusters theme song and have a cake walk to the monster mash, mom would put cold spaghetti and baby carrots in bowls and we would have to feel them with our eyes closed, we would decorate sugar cookies and eat popcorn balls. I enjoyed those parties even more than trick or treating!
September 4, 2014 at 4:18 PM

Kelli Martinelli said…
Yes! I think we'll do that. I remember the cold spaghetti in a bowl thing, and peeled grapes for eyeballs! The kids will love it.
September 5, 2014 at 9:05 AM

OrangeMew said…
What a great post on balancing your needs and wants but being able to step back and see what is best for the kids and letting it go. I think your yardstick of making great meaningful memories is an incredible standard to measure by!
September 5, 2014 at 10:19 AM

Bonnie Weeks said…
It's one of my favorite things to read/see/hear about kindness. Seriously, you did this one right. Right by you, by him, and by the kids. Props for listening to your gut and having the confidence to change plans.
September 5, 2014 at 8:51 PM

westmetromommy said…
I'm sorry you won't have your kids with you for Halloween this year but, with the exception of trick or treating, you can still celebrate Halloween before their time with their dad! Heck, Halloween practically starts the day after Labor Day!
September 6, 2014 at 2:27 PM