The kids still really haven't caught on. Emotions still get heated and the drama still escalates when one of them has to poop ... and the other one has to poop at the same time. They still whine outside the bathroom door, hopping on one foot and then the other, yelling "Mommmmmm, he's taking too long!" And I call out the magical and urgent Mom call that has not to this day sped up the child pooping process. "Hurry it up! Your sister has to go, too!" And then we remember, we have 2 toilets now. Holy. Blessed. Shit.

It's been a lifelong struggle. I grew up in a household of five: four women with periods, small bladders and crimping irons, and one man with a tree in the corner of the backyard.

The struggle is real.

But no longer will one child have to try to take a bath while the other fouls up the bathroom air with yesterday's PB&J. We have entered in to a golden era. Nay, we have entered into The Porcelain Era.

I would be lying if I didn't admit to you that I have dreamed of the day that I could blog an ode, Ode to Bathroom #2. I'm 37 years old, and for the first time in my life I have a 2nd bathroom. It is glorious. And I even hear rumors that there are homes that have more than 2 bathrooms! More than even (gasp/faint) 3! It feels like when Marty McFly admitted to his 1950's mom's family that he had not one, but two television sets in his house. Scandalous! Luxurious. Jealous. 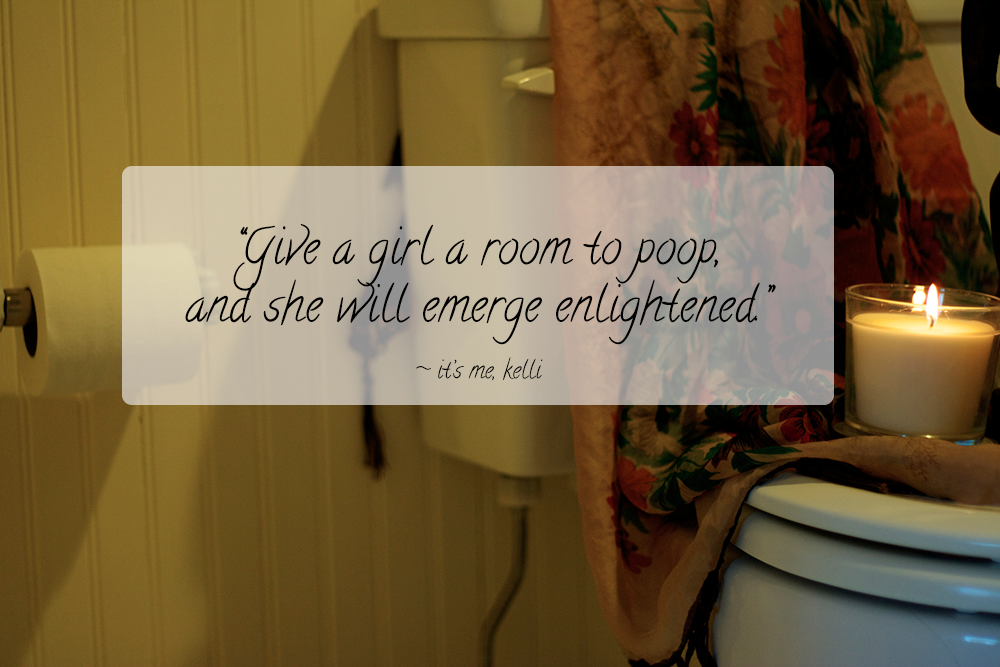 But the struggle IS real.

While I prance like a filly through a field of toilet seats, the lack of access to hygienic toilets is a massive global problem. 4 out of 10 people in the world don't have access to a clean toilet. And here I am, with access to 2. And also next door to someone with 2. And so on, all around me.

Toilets aren't just a matter of making us comfortable while we unburden ourselves of that which makes us smelly. For this 16 year old, it means she has privacy and dignity when managing her menstrual cycle -- especially important in a community that still sees menstruation as an embarrassment and a taboo. Access to a private toilet means she no longer misses school out of fear and anxiety, an issue that still affects millions of girls worldwide.

And if that makes you as uncomfortable as shitting in the woods in winter, here's why toilets matter. In the absence of basic sanitation facilities, waste from infected individuals can contaminate a community's land and water, increasing the risk of infection amongst the people that live there. People often have to live close to and even drink water from an environment that is contaminated with waste, including the waste of infected individuals. If the water is infected, then so is the dirt, the food, and even the flies. 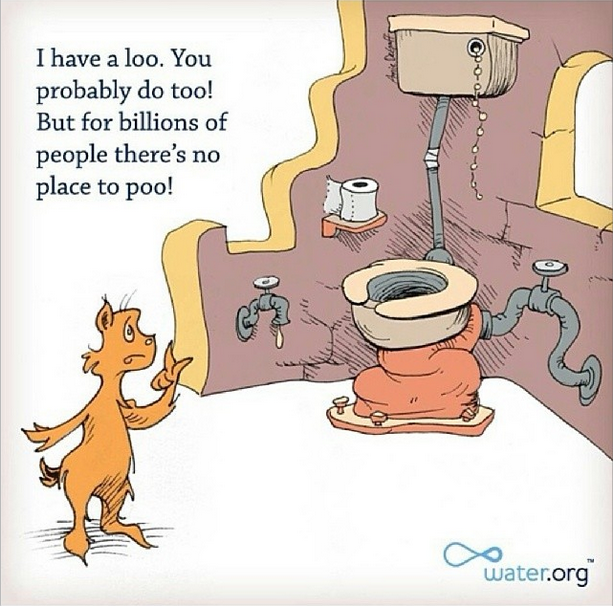 Does that mean I need to feel crappy about my two glorious shitters? I don't think so. But it certainly means I appreciate them more, understanding how it has affected the general wellness of our world, and that there is still so much that can be done. Easily. Preventably. Non-profits like WASH United and Water.org are dedicated to improving water and sanitation issues globally. Improvements are being made with increasing access to clean toilets, improving hygiene practices like routine handwashing, and education. These organizations and others can only make change when we -- the people with toilets -- actually chip in to help.

I wasn't asked by anyone to write a blog post about toilets. Honestly, I didn't even realize that #WorldToiletDay was a thing until I saw WASH's picture of Earl Blumenauer in my newsfeed. But I had simply been thinking that I am still so grateful that I no longer have to worry that a child of mine might be forced to drop trow in the backyard (again). And I know that this shouldn't be a luxury, but a human right.

POST PUBLISH NOTE: My incredibly insightful friend, Sabrina, clarified "that thing that happens when one person is showering and another is pooping, it has a name. At least in our house. "Sheet-zah-nah" (shit-sauna" but said fancy like. Sheet-zahnah."
Email Post
Labels: #WorldToiletDay global health menstruation parenting sanitation toilets WASH United

Ladies in Navy said…
this is so true! i've also dreamed of a 2 toilet household for a while - grew up in a four person family with one bathroom and now have a two person family and one bathroom. less terrible, but definitely would love two! good to remember our haves and have nots! great post
November 17, 2014 at 9:02 AM

marlynn said…
The struggle IS real. I admit that when house hunting, additional toilets was a must for us. More important than a bigger closet or even a backyard. More than 1 toilet saves sanity in my family. Definitely good to have the reminder, too, that we are really blessed to have even one.
November 17, 2014 at 9:05 AM

Kelli Martinelli said…
Isn't it crazy the things we take for granted? Thanks for the comments, ladies!
November 17, 2014 at 9:22 AM

Bill Volckening said…
It's probably not as funny if you have kids, but to the single bachelor it is funny.
November 17, 2014 at 9:22 AM

Kelli Martinelli said…
Thanks Aubrie! I'd been looking forward to having a photoshoot with my toilets for some time now. :)
November 17, 2014 at 3:52 PM

Unknown said…
We don't have a large house, but I am SO grateful to have two small bathrooms - growing up we only had one for our family, so even though bigger bathrooms would be nice, I'm happy to have two!
November 17, 2014 at 4:25 PM

Unknown said…
We don't have a large house, but I am SO grateful to have two small bathrooms - growing up we only had one for our family, so even though bigger bathrooms would be nice, I'm happy to have two!
November 17, 2014 at 4:25 PM

Renée @ The Good Hearted Woman said…
I once owned a house with four toilets. Four! And at time that still didn't seem to be enough for my five daughters. Honestly, right now I feel like copying your link and pasting it on all their Facebook pages - reminding them how blessed we are to have things like running water and public sanitation services: the only thing stopping me is that I don't want to be one of "those" moms. But still, wow, thanks for the reminder. (P.S. I do not miss cleaning four bathrooms.)
November 17, 2014 at 5:30 PM

Megan Gray said…
We have had two toilets for a while now. Definitely a luxury that you don't think about too often.
November 17, 2014 at 7:41 PM

Belcher said…
We're just beginning a home search, and two toilets is at the top of our list (mainly because I hate the fact that I'm always stepping in someone else's pee). But honestly, if we end up in a new home with just one bathroom, it will be enough. Thanks for the reminder.
February 28, 2015 at 8:42 PM