The Homeless Dogs of Nepal - Part 2


One of the themes that has emerged since I left the Annapurna Sanctuary and re-entered the Americasphere is to (pardon the cliché) take each moment one step at a time. One breath at a time. One moment to the next without racing ahead to a time out of order and a place out of reach. One stair at a time was the only way to get from Ulleri to Annapurna Base Camp and back down to Phedi. It's the only way to get from making a cup of tea in the morning to fussing over a tight budget in the afternoon and back down to an apple fritter for dessert. 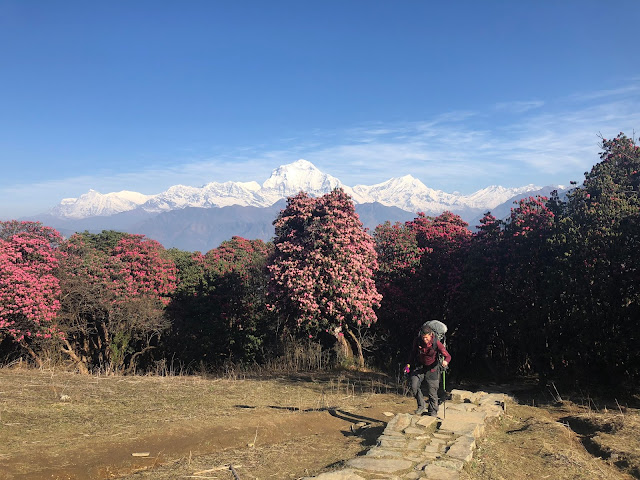 One step at a time isn't that hard. But the whole staircase in one giant stride is impossible. It's defeating to even think about, isn't it? It's why marketers have their jobs cut out for them: selling the idea of step-elimination and convenience. Even though one step at a time is generally easy, it's so tempting to look way up to the summit (or down to the valley) and quickly wish "be there now!" And sometimes it happens. Steps are eliminated. Instead of 50,000 individual steps, there are 20: 10 steps on to the helicopter, and 10 steps off. 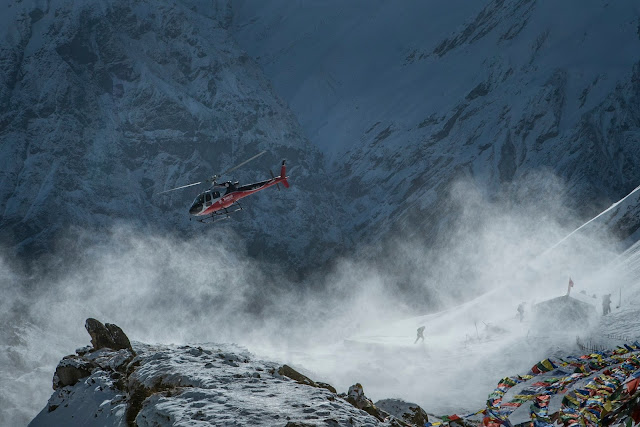 The story though, I think, is in the stair climbing.

If I had eliminated steps, I would have missed:

The stairs to Ulleri - For the sunrise, though mostly for their pain. 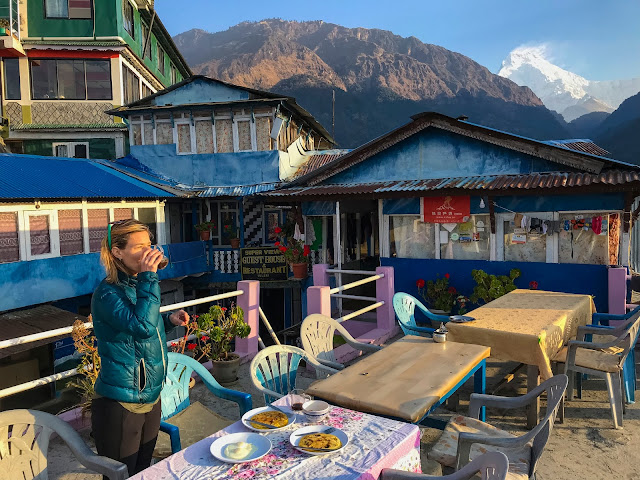 The stairs to Poon Hill - because that's where I met Poon Dog, fellow stairclimber and lover of sunsets. 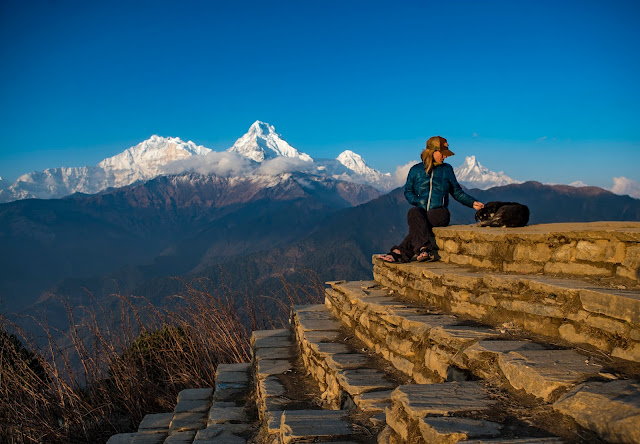 The stairs between Ghorepani and Tadapani - Because I never before met a rhododendron that could swallow me whole. 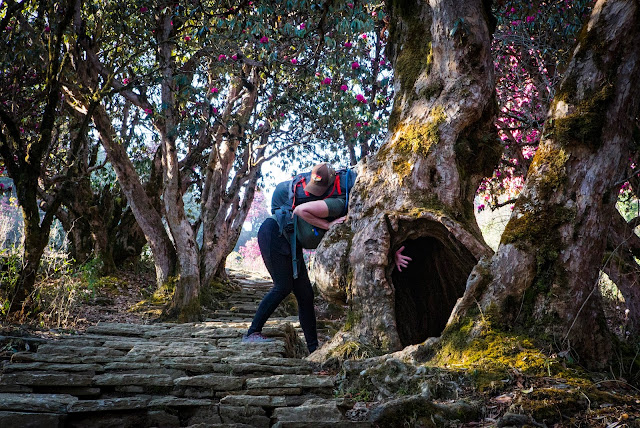 The stairs to, from, and back again to Chomrung - Where Young Man Chomdog likely awaits a new batch of trekkers to cross the bridge that he never will, and Old Man Chomdog still sleeps in the gateway to Hotel Excellent View, hoping that the next foot to fall near his head will be quickly followed by a gentle ear scratch. 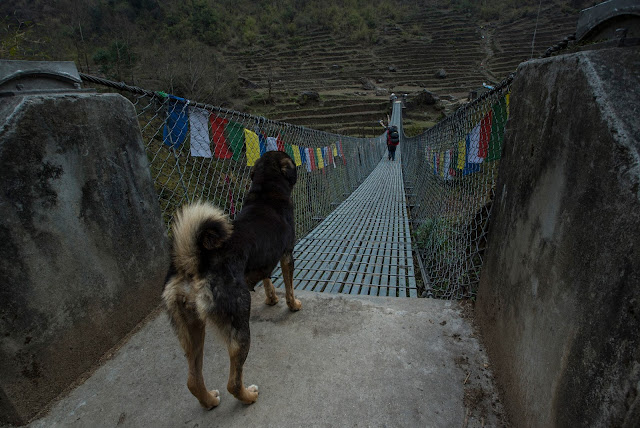 If I had eliminated steps, I would have missed:

"NAMASTE! NAMASTE! NAMASTE! I'm 75 years old and I'm from Korea!" from an elated trekker who just set foot on the final step into Annapurna Base Camp and lifted his trekking poles in triumph as we lifted our beers in a toast.

"Abcdefghijklmnopqrstuvwxyz!" from a bright eyed, tikka-smeared five year old, who would have most definitely eaten the gooey and sucked on freeze dried ice cream out of the dirt if John and I hadn't instinctively and violently shaken our heads "no no no" to which she laughed. 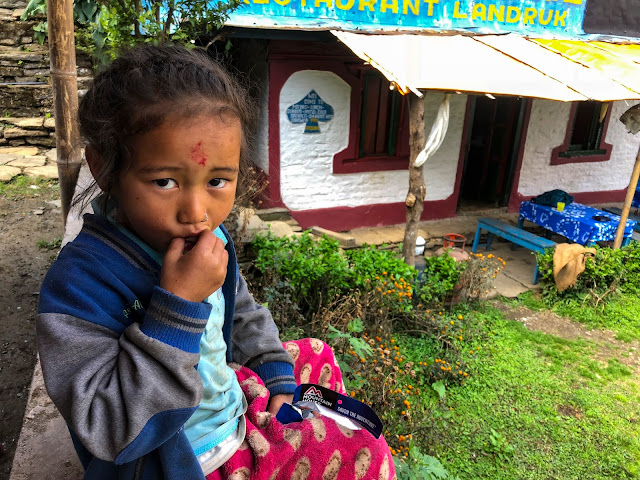 I took the steps onto the guest lodge rooftop to stare into the flashing eyes of the approaching storm.

I took the steep steps down to Jhinu Hot Springs, wrapped in rain gear and muttering a mantra "down d-down down", a lullaby to soothe my flaming knee, and the steps obligingly brought me to the comforting pools, where rain bounced off the pool surface and into my nose. 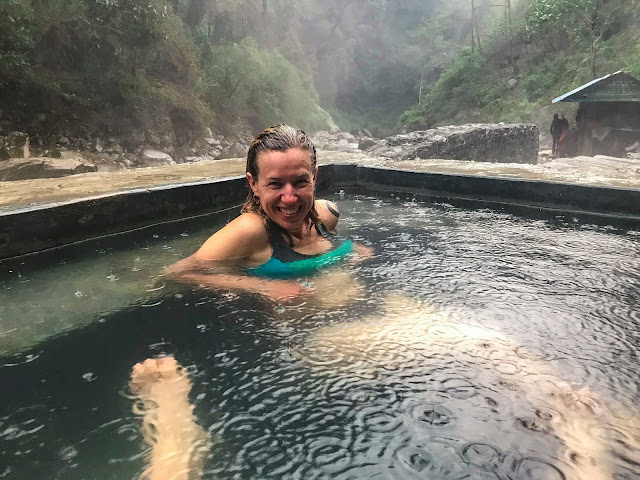 One step at a time means more.

One step at a time means a wave and muttered hello from the toothless old man sitting on the stones nearby, whittling the ends of bamboo. It means kindly asking a cow to please step to the side, even though he won't and that's totally okay. 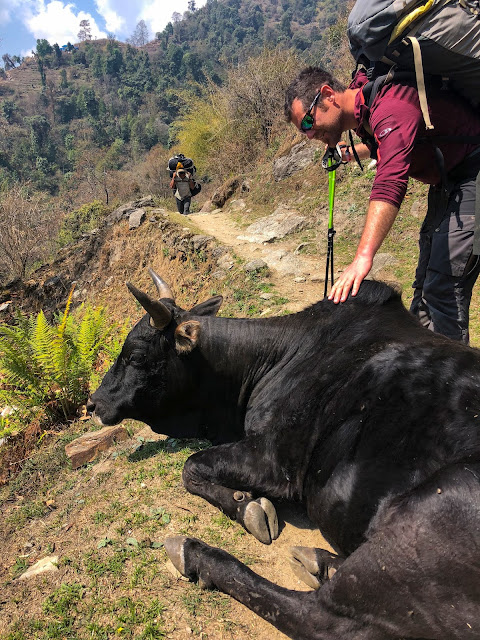 One stair is broad and sturdy, another stair is stupid -- no way should steps be so tall. One step is glimmering silver in the sunlight, and one has tiny purple flowers escaping from the cracks. One is littered in tiny brown caterpillars, some already smooshed by the heedless footfalls of trekkers, porters, and ponies. One step gives way underfoot and an embarrassing "Wooo nooo ...!" eeps out from sunburnt lips. And most of the steps are covered in cow shit, horse shit, and cute little baby goat shit. 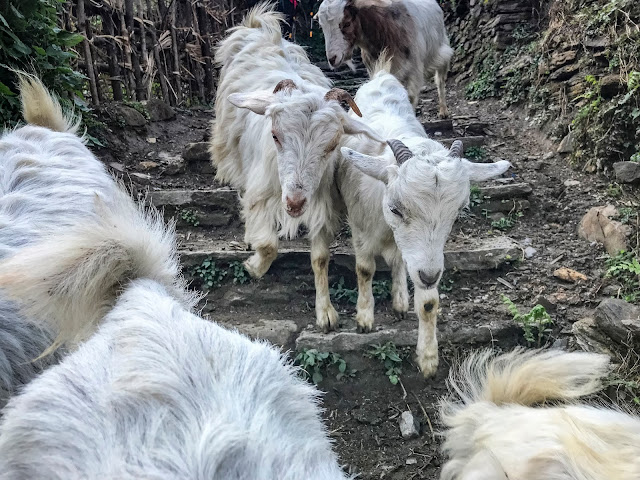 There seems to be no better life metaphor for me right now than this one. One step at a time. The up will be a challenge that makes me feel strong and growing stronger, but not without the occasional thigh cramp. The down will seem so easy, but while other trekkers may fly by me on knees of steel, it will at times be very hard, and I will be vulnerable. And it's when I'm at my most vulnerable that the wisest thing I can do is to set my own pace, and be thoughtful and focused about where my next step will land. 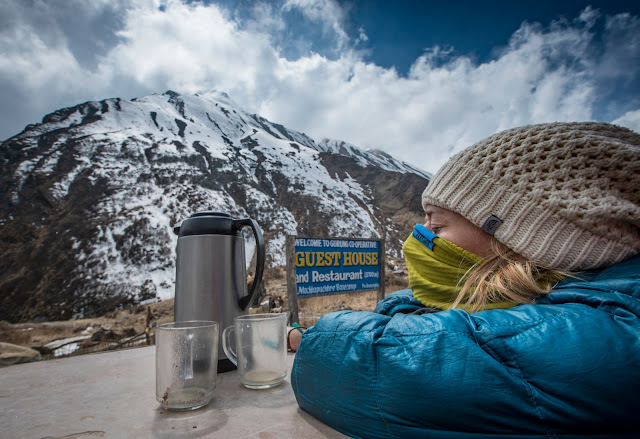