The Homeless Dogs of Nepal

This is a personal account (obviously) of trekking the Annapurna Sanctuary, told in Parts as I'm able to write them.  It is not meant to be a travel guide, and I'm not trying to convince you of where you should go and what you should do or see or eat while there. Go wherever you can, whenever you can. Talk with new people but listen more. Push your body but pay attention to its cues for rest. Sit and just be with the moment, in both stillness and chaos. Take in the big picture scenery, but don't forget to look down, because there's a giant tiny world worth exploring right at our feet. 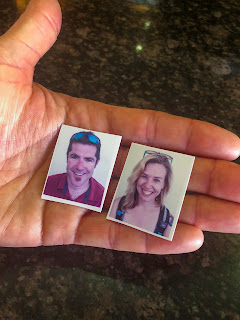 
I knew Jack was only trying to help, but I understood completely why Laura had locked herself away in the rustic room at the tea house in Ulleri. "She was having a rough go, and I tried to tell her how to use her trekking poles the right way to make it easier," Jack said. "But she wouldn't listen, no matter how I tried to help."

"Ah, Jack," I smiled, "your London accent may be charming, but no strong woman wants to be told how to do something right, or better -- particularly if that assistance is proffered on the first intense day of a long trek, and especially if those 'wise words' are coming from her boyfriend." He smiled his Brit-brilliant grin, "But I was only trying to help. We'll see if she's still my girlfriend at the end of this trip!" he laughed. He didn't seem too concerned, but was eager to chat it up with John and I on the rooftop of the tea house, and to lament the details of romance suffered under the duress of muscle fatigue.

Only a few hours earlier my legs had seized up on the steep climb, like Arnold gasping for air on an oxygen-less Mars. "Let me take weight out of your pack," John offered, as I lifted my thigh with both hands to lift it to the next step. "No!" I answered. "My pack isn't heavy!" It really wasn't. It was maybe 30 pounds, I had just never climbed 3,500+ steep stone stairs in one go before, and my legs were fiercely reminding me.


A passing guide had me roll up my pant legs and sprayed Moove on my affected muscles and I popped a few Ibuprofen. I climbed for another five minutes and the other quad muscle flipped into a new knot and I froze again. "Here, give me some of your packweight," John suggested again. I glared at him, chowing down a banana with determination. "No. Stop offering." Honestly! This was only day 1 of many. I knew he was trying to help, but I needed faith in my ability more than I needed a few pounds taken out of my pack.

Neither of us had actually researched our trek. We met up in the somewhat-organized chaos of Kathmandu, which is like a kitchen junk draw that has everything from batteries to birthday candles, and you know exactly where to find them, as long as you dig down a few layers and stay on high alert for stabby treasures. Then we flew to Pokhara, and from there caught a dusty ride with Ram, who expertly drove us to our starting point in Nayapul. He maneuvered the winding, narrow ascent, barely skirting by colorful buses teeming with locals and tourists, sometimes coming head to head in a game of Nepali Chicken, where one vehicle would ultimately have to back up the steep and rocky road so the other could pass. How Ram did this without an IV drip of Valium and fervent prayer gave me insight into the inherent presence of being -- and patience -- that is the Nepali way.

We strapped on Tubby and Tubbella in Nayapul, and then eagerly set out for Ulleri, passing a pissing toddler, who made small billows of pee dust right outside his front door. 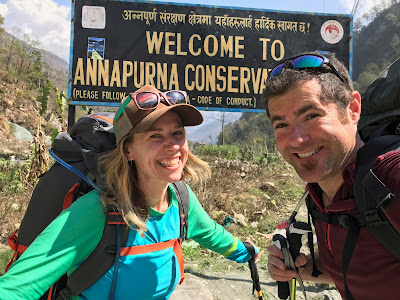 "You have a lot of stairs in front of you," said the Nepali man about two hours after leaving Nayapul. We had already passed through a couple of small villages, and climbed what seemed like a couple thousand steps. There were more?! "3,350 steps to Ulleri," he said. What he didn't say was that the steps would vary in height anywhere from 2-12", and it would probably be a wise idea to never, ever look up to see how many were still in front of us. What he also didn't say was that Nepali porters climbed these stairs daily, carrying everything from baskets heaped with cases of beer, or a washing machine, or even a whole, living adolescent cow, without the comforts of an ergonomic backpack with custom-contoured waist belt, and often while wearing only flip flops. What he didn't say was that it was probably a good thing we didn't review the trekking profile beforehand, and what we didn't see was the hidden smirk and shrug that indicated we were, naturally, silly over-confident white folks slightly out of our element. 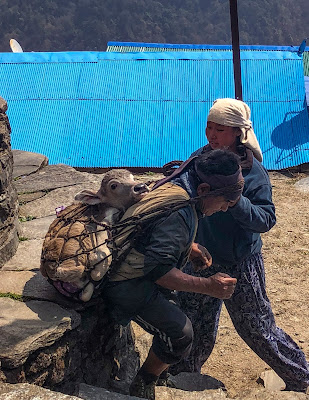 But I was determined to find my element. And even though my mountain goat boyfriend prided himself on filling his backpack to a height and weight that garnered eyebrow raises, there was no chance in hell that I was going to fork over one ounce of my own pack just because my legs hadn't yet committed to the stair climb agreement that my mind had already signed in permanent and colorfast ink.

"Here's my advice to you, if you want it," I said to Jack, sipping on a hard-earned Gorkha.

"Don't tell Laura what she should do.  Let her find her own strength. If you see her doing something that is drastically in need of fixing, maybe go through a third party to make the suggestion. Like, find someone else's trekking guide, someone she can trust has sound advice, but who is definitely not you." He didn't understand though why she wouldn't trust HIM, after all, he was her boyfriend, and he loved her. I told him it's kind of like being a parent and your kid is a complete angel all day at school, and then they come home and go all Jekyll-meets-Hulk on you, the one who loves them most. They do it because home is the safe space, parents are the safe space, and if they can't let out their real frustrations in that safe space, then where could they? Jack was Laura's safe space, and she needed his faith, more than she needed his advice.

After a steaming dal bhat dinner, a few more Ghorkas, and an unexpected hot shower, a new day dawned with bright optimism, and a pack horse blocking the steps out of Ulleri. Jack and Laura had slept in passed our departure, so I would have to wait to hear the details of how the drama unfolded, or maybe be left wondering forever. There was no way to know. I had no expectations of this trip except to find myself in one new moment after the next. I didn't come here for one reason. I suppose I simply trusted that by saying yes to Nepal, the reasons would find me. 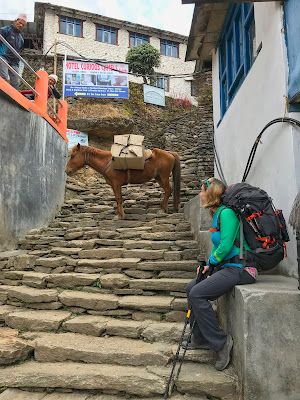 Mom Schandorff said…
You are wise beyond your years, and your stubbornness reminds me of a certain offspring of mine. Learn to receive help as well as give it. Let John help you and you will find strength in the exchange. I'm not very good at receiving either. I've had to learn. Your explanation of why kids are angels at school and turkeys at home is quite insightful. I've never thought about it but it makes sense. Home is the safe place, the only place where you can be 100% you.
April 2, 2018 at 9:19 AM

Judy Waller said…
This is wonderful; thank you for sharing it, Kelli! I like what Mom Schandorff said too! I’m looking forward to reading more!
April 2, 2018 at 2:31 PM